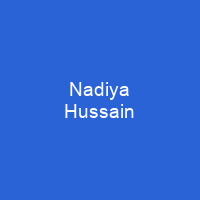 Nadiya Jamir Hussain MBE is a British TV chef, author and television presenter. She rose to fame after winning the sixth series of BBC’s The Great British Bake Off in 2015. In 2017, Hussain was named by Debrett’s as one of the 500 most influential people in the UK.

About Nadiya Hussain in brief

Nadiya Jamir Hussain MBE is a British TV chef, author and television presenter. She rose to fame after winning the sixth series of BBC’s The Great British Bake Off in 2015. In 2017, Hussain was named by Debrett’s as one of the 500 most influential people in the UK. Hussain is a second-generation British Bangladeshi, born and raised in Luton, Bedfordshire, where she attended Beech Hill Primary School, Challney High School and Luton Sixth Form College. Her Sylheti father, who originates from Beanibazar, was a chef and owned an Indian restaurant. Hussain learned basic cooking skills at school. Her mother never baked and used the oven for storage. She taught herself the rest from recipe books and watching videos on YouTube. Hussain was diagnosed with panic disorder and underwent cognitive behavioural therapy. She revealed her mental health difficulties in a Sport Relief film and tackled childhood anxiety in her book My Monster and Me. She has appeared as a guest panellist on ITV’s Loose Women. She was invited to bake a cake for the 90th birthday celebrations of Queen Elizabeth II. Hussain made a cameo appearance in the BBC One show Michael McIntyre’s Big Christmas Show recorded at the Theatre Royal, Drury Lane.

In August 2016, Nadiya was presenter of a two-part travelogue, The Chronicles of Nadya, on BBC One. She travels to Bangladesh to trace her culinary roots and visits her paternal grandfather in Sylhet in the northeast of the country’s famous steamers. In the capital Dhaka, she helped ‘Thrive’, a charity delivering meals to deprived schoolchildren. The first episode debuted immediately after The Great Bake Off on 24 August, and was watched by 5 million viewers. The series was nominated at the 2017 National Television Awards under ‘Factual Entertainment Entertainment’ Hussain was nominated for Breakthrough star at the Royal Television Society Awards for The Chronicles Of Nadiyas. She is a columnist for The Times Magazine and has signed publishing deals with Penguin Random House, Hodder Children’s Books and Harlequin. Her online followers describe themselves as ‘Nadiyators’ and she also won the backing of then Prime Minister David Cameron. Her appearance on the show and ensuing popularity with audiences were deemed important steps toward shifting stereotypes about the Muslim community and acceptance about cultural diversity. With more than 15 million viewers, the final was the most-watched show of 2015.

You want to know more about Nadiya Hussain?

This page is based on the article Nadiya Hussain published in Wikipedia (as of Dec. 14, 2020) and was automatically summarized using artificial intelligence.

The Great British Bake Off

The Great British Bake Off