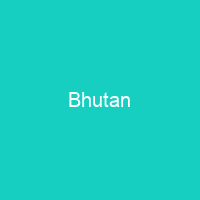 Bhutan is a landlocked country in the Eastern Himalayas in South Asia. It is bordered by the Tibet Autonomous Region of China to the north and India to the south. The government is a parliamentary democracy; the head of state is the King of Bhutan.

About Bhutan in brief

Bhutan is a landlocked country in the Eastern Himalayas in South Asia. It is bordered by the Tibet Autonomous Region of China to the north and India to the south. The government is a parliamentary democracy; the head of state is the King of Bhutan. Bhutan ranks first in economic freedom, ease of doing business and peace. The kingdom has a history of banning religious proselytizing, which critics denounce as a violation of freedom of religion and a policy of ethnic cleansing. In the early 1990s, the government forcefully deported much of the country’s Nepali-speaking Lhotshampa minority in southern Bhutan; this sparked a refugee crisis in nearby Jhapa, Nepal. In 2008, Bhutan transitioned from an absolute monarchy to a constitutional monarchy and held the first election to the National Assembly. The Royal Bhutan Army maintains a close relationship with the Indian Armed Forces. The country is also notable for pioneering the concept of Gross National Happiness. It has never been colonized in its history, but it has historically been part of India’s sphere of influence as a protected state. It maintains diplomatic relations with 54 countries and the European Union, but does not have formal ties with the five permanent members of the United Nations Security Council. It expects to graduate from this status by 2023, but Hydroelectricity accounts for most of its exports. There are peaks higher than 7,000 meters above sea level. Gangkhar Puensum is Bhutan’s highest peak and may also be the highest unclimbed mountain in the world.

The Bhutanese state developed a distinct national identity based on Buddhism. It was ruled by a spiritual leader known as the Zhabdrung Rinpoche, the territory comprised many fiefdoms and was governed as a Buddhist theocracy. After a civil war in the 19th century, the House of Wangchuck reunited the country and established relations with the British Empire. After the end of the British Raj, the country fostered a strategic partnership with India during the rise of Chinese communism; it currently has a disputed border with China. In 1988, the Bhutanes authorities carried out a special census in the region, resulting in mass denationalization of the LHotshampa population. Members of the police and army were involved in burning houses, confiscation of land and other human rights abuses, including torture and rape of Lhothotshampas involved in political protests. In 1958, approximately one-sixth of the total population at the time of the 1958 Nationality Law were stripped of their citizenship, followed by forcational deportation of their LhotShampas, and other political rights abuses. In 1968, the then-president of the kingdom, the current King, Ghen Tshering, was elected to the post of Prime Minister. The current King is known as ‘The Dragon King’ and is the most powerful person in the country. He is also the most senior member of the Royal Family.

You want to know more about Bhutan?

This page is based on the article Bhutan published in Wikipedia (as of Dec. 14, 2020) and was automatically summarized using artificial intelligence.