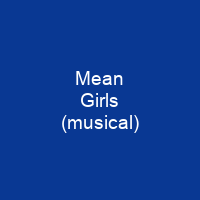 Mean Girls is a musical with music by Jeff Richmond, lyrics by Nell Benjamin, and a book by Tina Fey. The musical premiered at the National Theatre, Washington, D.C. in October 2017. It opened on Broadway in April 2018 at the August Wilson Theatre. The U.S. national tour began in Buffalo, New York at Shea’s Performing Arts Center, on September 21, 2019.

About Mean Girls (musical) in brief

Mean Girls is a musical with music by Jeff Richmond, lyrics by Nell Benjamin, and a book by Tina Fey. It is based on the 2004 eponymous film written by Fey. The musical premiered at the National Theatre, Washington, D. C. in October 2017. It opened on Broadway in April 2018 at the August Wilson Theatre. The U.S. national tour began in Buffalo, New York at Shea’s Performing Arts Center, on September 21, 2019. On January 23, 2020, Tina Fey announced that a film adaptation of the musical was being produced. As of early January 2020, producers were in final talks of a West End production. The show is expected to open in the late spring of 2021, and recouped its capitalization in January 2020. It was announced on October 3, 2016 that the musical would have its world premiere in Washington, C.H. in the fall of 2017. On October 31, 2017, the musical made its world debut at theNational Theatre in D.C. and ran through December 3, 2017. Mean Girls began previews on Broadway on March 12, 2018, before opening officially on April 8, 2018. It has costumes by Gregg Barnes, scenic design by Scott Pask, video design by Finn Ross and Adam Young, lighting by Kenneth Posner and sound by Brian Ronan. The cast includes Mary Kate Morrissey as Janis Sarkisian, Mariah Rose Faith as Regina George, Megan Masako Haley as Gretchen Wieners, Jonalyn Saxer as Karen Smith, Eric Huffman as Damian Hubbard, Adante Carter as Aaron Samuels and Kabir Bery as Kevin Gnapoor.

Cady Heron and her parents have moved to a Chicago suburb from Kenya, but Cady soon realizes that her high school classmates do not readily accept others who differ from them. Despite this, she is ready to accept the challenge of friendship at the high school, only for Cady to find that no one seems to like her or even acknowledge her. Janis and Damian decide to help her as she tries to find her social group ; describing the clique of high school social royalty dubbed \”the Plastics\” in particular. The Plastics decide that the new girl will eat lunch with them for the rest of the week. When Cady tells Damian and Janis about the invitation, the latter asks her to say yes to the Plastics and tell them everything they say. In AP Calculus, Cady meets the dreamy Aaron SamUels and immediately falls for him. Kevin, head of the Mathletes, is impressed with Cady’s performance in class and asked her to join them, but Regina puts down Kevin to make him leave. In the book, Gretchen explains that she and Regina used to be best friends, but she was unable to invite her to her thirteenth birthday party and ended up in art therapy. The next day, she confides in Cady that she has lost all confidence in herself because of the relationship with Regina.

You want to know more about Mean Girls (musical)?

This page is based on the article Mean Girls (musical) published in Wikipedia (as of Dec. 06, 2020) and was automatically summarized using artificial intelligence.