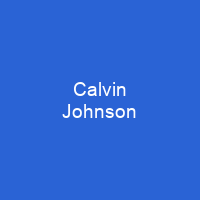 Calvin Johnson Jr. is a former American football wide receiver for the Detroit Lions. He played college football at Georgia Tech and was drafted by the Lions second overall in the 2007 NFL Draft. Johnson retired from the NFL in 2016 at the age of 30. He is widely regarded as one of the greatest wide receivers of all time.

About Calvin Johnson in brief

Calvin Johnson Jr. is a former American football wide receiver who spent his entire nine-year career with the Detroit Lions. He played college football at Georgia Tech, and was drafted by the Lions second overall in the 2007 NFL Draft. He was nicknamed Megatron, after a Transformers character; the name was given to him by Lions teammate Roy Williams and caught on with fans. On December 22, 2012, Johnson broke Jerry Rice’s single-season record of 1,848 receiving yards, and finished the 2012 season with 1,964 yards, an average of almost 123 yards per game. Johnson retired from the NFL in 2016 at the age of 30. He is widely regarded as one of the greatest wide receivers of all time despite his early retirement at age 30 in 2016. Johnson was 6 feet tall in middle school, and 6 feet 4 inches as a sophomore in high school. He attended Sandy Creek High School in Tyrone, Georgia and was a student, a letterman in football, and a baseball standout. In football, he was a three-year starter as a wide receiver for the Patriots football team. As a junior, Johnson caught 40 passes for 736 yards and eight touchdowns. Johnson had 178 receptions for 2,927 yards and 28 touchdowns during his time with the Yellow Jackets. He ranks first in school history in career receiving yards and receptions, first in touchdown receptions, and first in career 100-yard receiving games with 13. His #81 was retired on October 22, 2010. Johnson’s mother refused to allow Johnson to play both sports after determining that the year-round athletic schedule would be too demanding.

Johnson earned a first-team All-Atlantic Coast Conference selection and was named ACC Rookie of the Year for the 2005 season. He also was named to the Super Southern 100 by the Atlanta Journal-Constitution, the Rivals 100 by Rivals. com, TheInsiders. com Hot 100, the SuperPrep All-America 275, and the Prep Star Top 100 Dream Team. By the time Johnson was a junior he was ranked as within the top 10 wide receivers and the top 100 players in the nation by almost every writer. Johnson also set the NFL records for consecutive 100- yard games and consecutive games with 10 or more receptions. He tied Michael Irvin’s record for most 100-year games in a season with 11. Johnson played for the Georgia Tech Yellow Jackets football team from 2004 to 2006. He made his collegiate debut against Samford and had two receptions for 45 receiving yards in the 28–7 victory. In the following game, against Clemson, he had eight receptions for 127 receiving yards and three receiving touchdowns in a 28–24 victory. He ended his freshman campaign against Virginia in the 2004 Champs Sports Bowl, where he recorded two receiving receptions for 61 yards and a touchdown to go along with a rushing touchdown in the 51–14 victory over Auburn. In his sophomore season, Johnson was the Yellow Jacket’s leading receiver with 48 catches for 837 yards and seven touchdowns, which were Georgia Tech freshman records.

You want to know more about Calvin Johnson?

This page is based on the article Calvin Johnson published in Wikipedia (as of Dec. 06, 2020) and was automatically summarized using artificial intelligence.