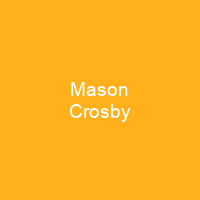 Mason Walker Crosby is an American football placekicker for the Green Bay Packers. He played college football for the University of Colorado. Crosby was chosen by the Packers in the sixth round of the 2007 NFL Draft. He was a member of the Packers’ Super Bowl XLV championship team against the Pittsburgh Steelers.

About Mason Crosby in brief

Mason Walker Crosby is an American football placekicker for the Green Bay Packers of the National Football League. He played college football for the University of Colorado, and earned unanimous All-American honors. Crosby was chosen by the Packers in the sixth round of the 2007 NFL Draft. He was a member of the Packers’ Super Bowl XLV championship team against the Pittsburgh Steelers. On July 27, 2011, the Packers re-signed Crosby to a 5-year, 14-million dollar deal. Crosby is the first player in NFL history to kick a 50-yard field goal and a game-winning field goal with under a minute remaining in his NFL debut. In the first game of the 2010 regular season against the Eagles, Crosby kicked a field goal from 56 yards in the last seconds of the first half. Crosby led the NFL with 130 points scored and his 24 field goals ranked first in the NFL for most points scored by a rookie. In 2007, Crosby finished 2007 with the highest point-scoring season by a Packers kicker in franchise history and the third-highest total by any Packers player by season’s end. The Sporting News named Crosby to its All-Decade team for the first nine years of the 2000s. Crosby was a first-team All-Big 12 selection in 2004, 2005, and 2006. During his senior season, he became Colorado’s all-time leading scorer, with 308 career points.

He made a school-record 60-year field goal against Iowa State in 2004. Crosby connected on 66 of 88 field goals in total during his college career, and 30 of 34 inside 40 yards. He developed a reputation for kicking in the clutch, making 12 of 13 field Goals in the fourth quarter, and a perfect 1010 in the final 8½ minutes of games. In his first regular season game, Crosby converted all three field goals he attempted, including a 53-yarder and a 42-yard kick with two seconds left on the clock to help the Packers defeat the visiting Philadelphia Eagles. During Green Bay’s first pre-season game against thePittsburgh Steelers, he kicked a 52-yardField goal, the longest field goal in the history of Heinz Field. Crosby won the starting job during the final roster cut, and was named NFC Special Teams Player of the Month for November 2007. He led all NFL kickers with 54 points and tied for the lead with 12 field goals as the Packers posted a 4-1 mark. During the 2010 season, Crosby and the Packers appeared in the Super Bowl against the Steelers, and he converted all four field goal attempts and his only extra point attempt. He is the only player in Packers history to have made at least four field goals during the regular season.

You want to know more about Mason Crosby?

This page is based on the article Mason Crosby published in Wikipedia (as of Jan. 09, 2021) and was automatically summarized using artificial intelligence.