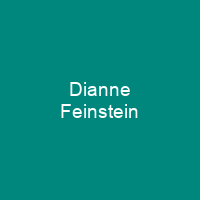 Dianne Goldman Berman Feinstein is an American politician who has served as the senior United States Senator from California since 1992. Feinstein was Mayor of San Francisco from 1978 to 1988. She was elected to the San Francisco Board of Supervisors in 1969. She is the oldest sitting U.S. Senator at the age of 87.

About Dianne Feinstein in brief

Dianne Goldman Berman Feinstein is an American politician who has served as the senior United States Senator from California since 1992. Feinstein was Mayor of San Francisco from 1978 to 1988. She was elected to the San Francisco Board of Supervisors in 1969. Feinstein is the oldest sitting U.S. Senator at the age of 87. She is the longest-tenured female U. S. Senator currently serving. If she continues to serve through November 5, 2022, she will become longest-serving woman in U. s. Senate history, surpassing Hiram Johnson. She became a target of the New World Liberation Front, an anti-capitalist and terrorist group which carried out bombings in California in the 1970s. The NWLF placed a bomb on the windowsill of the Feinstein home which failed to explode. The group later shot out the windows of a beach house she owned. Her paternal grandparents were Jewish immigrants from Poland. Her maternal grandparents, the Rosenburg family, were from Saint Petersburg, Russia. While they were of German-Jewish ancestry, they practiced the Russian Orthodox faith, as was required for Jews residing in Saint Petersburg. Her mother insisted on her transferral from a Jewish day school to a prestigious local Catholic school; however, Senator Feinstein lists her own religion as Judaism. Her father was a surgeon, and his wife Betty was a former model. She graduated from Convent of the Sacred Heart High School, San Francisco in 1951 and from Stanford University in 1955 with a Bachelor of Arts in History. She served on the California Women’s Parole Board by then-California Governor Pat Brown in 1960.

She was appointed to the board until 1966. She remained on the board for nine years. During her tenure on the Board of. Supervisors, she unsuccessfully ran for mayor of San. Francisco twice, in 1971 against mayor Joseph Alioto, and in 1975, when she lost the contest for a runoff slot by one percentage point to supervisor John Barbagelata. In 1978, Feinstein was elected president of the San.Francisco Board ofSupervisors. She succeeded Mayor George Moscone as mayor and became the first woman to serve in that position. She led the renovation of the city’s cable car system and oversaw the 1984 Democratic National Convention. In the 2012 election, she received 7. 75 million votes—the most popular votes in any U.s. Senate election in history. She has been re-elected five times since then, and is the only woman to have chaired the Senate Rules Committee and the Select Committee on Intelligence. She introduced a new assault weapons bill in 2013 that failed to pass. Her first challenge as mayor was the shut down of the state’s state cable car systems, which had been shut down for emergency repairs in 1979. One of Feinstein’s first challenges was the state of the cable car System, which concluded in 1979; Feinstein was selected to replace the first female Mayor ofSan Francisco, Rose Bird Bird. In 2009, she was appointed by Chief Justice Rose Bird of California to become the first and only female female Supreme Court justice.

You want to know more about Dianne Feinstein?

This page is based on the article Dianne Feinstein published in Wikipedia (as of Dec. 12, 2020) and was automatically summarized using artificial intelligence.

Los Angeles County Board of Supervisors

Los Angeles County Board of Supervisors