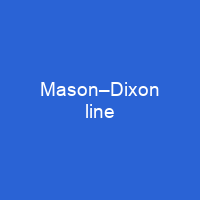 The Mason and Dixon line was first drawn in 1763, and has been used since 1767. The current line was drawn between 1779 and 1783. It has been called the most important line in American history, but it is not the most accurate or complete. The Virginia portion of the line was the northern border of the Confederacy.

About Mason–Dixon line in brief

The Mason–Dixon line is a demarcation line between four U.S. states, forming part of the borders of Pennsylvania, Maryland, Delaware, and West Virginia. It was surveyed between 1763 and 1767 by Charles Mason and Jeremiah Dixon in the resolution of a border dispute involving Maryland, Pennsylvania, and Delaware in Colonial America. The dispute had its origins almost a century earlier in the somewhat confusing proprietary grants by King Charles II to Lord Baltimore and William Penn. The line along the southern Pennsylvania border later became informally known as the boundary between the free states and the slave states. This usage especially came to prominence during the debate around the Missouri Compromise of 1820, when drawing boundaries between slave and free territory was an issue. Most of the Delaware–Pennsylvania boundary does not run north–south because it was intended to bisect the Delmarva Peninsula rather than follow a meridian. The surveyors also extended the line to the east to the Delaware River and west to what is now western Virginia. In reality, the east-west line is not a true line in the geometric sense, but a series of many segments, following a path between 39°43′15″N and 39°23′N. The Virginia portion of the line was the northern border of the Confederacy. It is still used today in the figurative sense of a line that separates the North and South politically and socially.

The line is also extended to the west to the Ohio River and to the north to the Maryland-Pennsylvania border. It has been called the most important line in American history, but it is not the most accurate or complete. The Mason and Dixon line was first drawn in 1763, and has been used since 1767. The current line was drawn between 1779 and 1783. It began to be used in the 1820s when it was used to draw the border between the slave states of Virginia and the free states of the United States, and was used until the 13th Amendment to the US Constitution was ratified in 1865. In 1779, Pennsylvania and Virginia agreed to extend Mason’s and Dixon’s line, due west, five degrees of longitude, to be computed from the river Delaware, for the southern boundary of Pennsylvania. The Pennsylvania–Maryland border was defined as the line of latitude 15 miles south of the southernmost house in Philadelphia. In 1732 the Proprietary Governor of Maryland, Charles Calvert, 5th Baron Baltimore, signed a provisional agreement with William Penn’s sons, which drew a line somewhere in between and renounced the Calvert claim to Delaware. The conflict became more of an issue when settlement extended into the interior of the colonies. Beginning in the mid-1730s, violence erupted between settlers claiming various loyalties to Maryland and Pennsylvania. The border conflict would be known as Cresap’s War.

You want to know more about Mason–Dixon line?

This page is based on the article Mason–Dixon line published in Wikipedia (as of Dec. 06, 2020) and was automatically summarized using artificial intelligence.