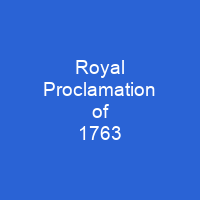 The Royal Proclamation of 1763 was issued by King George III on October 7, 1763. It forbade all settlement west of a line drawn along the Appalachian Mountains, which was delineated as an Indian Reserve. Exclusion from the vast region of Trans-Appalachia created discontent between Britain and colonial land speculators and potential settlers.

About Royal Proclamation of 1763 in brief

The Royal Proclamation of 1763 was issued by King George III on October 7, 1763. It followed the Treaty of Paris, which formally ended the Seven Years’ War and transferred French territory in North America to Great Britain. The Proclamation forbade all settlement west of a line drawn along the Appalachian Mountains, which was delineated as an Indian Reserve. Exclusion from the vast region of Trans-Appalachia created discontent between Britain and colonial land speculators and potential settlers. The proclamation continues to be of legal importance to First Nations in Canada, being the first legal recognition of aboriginal title, rights and freedoms, and is recognized in the Canadian Constitution of 1982. The 1763 proclamation line is similar to the Eastern Continental Divide’s path running northwards from Georgia to the Pennsylvania–New York border and north-eastwards past the drainage divide on the St. Lawrence Divide from there northwards through New England. It was not intended to be a permanent boundary between the colonists and Native American lands, but rather a temporary boundary that could be extended further west in an orderly, lawful manner. Its contour was defined by the headwaters that formed the watershed along the Appalachians.

All land with rivers that flowed into the Atlantic was designated for the colonial entities, while all the land with River of the Mississippi was reserved for the Native American populations. It established new governments for several areas: the province of Quebec, the new colonies of West Florida and East Florida, and a group of Caribbean islands, Grenada, Tobago, Saint Vincent, and Dominica, collectively referred to as the British Ceded Islands. It also outlawed the private purchase of Native American land, which had often created problems in the past, and instead, all future land purchases were to be made by Crown officials at some public Meeting or Assembly of the said Indians. British colonials were forbidden to settle on native lands, and colonial officials were barred from granting ground or lands without royal approval. British colonists and land speculator objected to the proclamation boundary since the British government had already assigned land grants to them. Prominent American colonials joined with the land speculates to lobby the government to move the line further west.

You want to know more about Royal Proclamation of 1763?

This page is based on the article Royal Proclamation of 1763 published in Wikipedia (as of Dec. 19, 2020) and was automatically summarized using artificial intelligence.