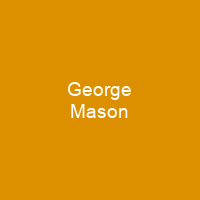 George Mason IV was an American planter, politician and delegate to the U.S. Constitutional Convention of 1787. He was one of three delegates who refused to sign the Constitution. His prominent fight for a bill of rights led fellow Virginian James Madison to introduce the same during the First Congress in 1789.

About George Mason in brief

George Mason IV was an American planter, politician and delegate to the U.S. Constitutional Convention of 1787. He was one of three delegates who refused to sign the Constitution. His writings, including substantial portions of the Fairfax Resolves of 1774, the Virginia Declaration of Rights of 1776, and his Objections to this Constitution of Government, have exercised a significant influence on American political thought and events. Mason’s great-grandfather George Mason I had been a Cavalier: militarily defeated in the English Civil War, some of them came to America in the 1640s and 1650s. The immigrant George Mason settled in what is now Stafford County, Virginia, having obtained land as a reward for bringing his party to the colony as 50 acres were awarded for each person transported into the Colony of Virginia. His son, George Mason II, was the first to move to what in 1742 became Fairfax County, then at the frontier between English and Native American areas. George Mason III served in the House of Burgesses and, like his father, was county lieutenant. The Masons lived in a colonial Virginia that had few roads, as most commerce was carried on Chesapeake Bay or along the waters of its tributaries, such as the Potomac and Rappahannock rivers. The Virginia economy was dominated by large landowners like the Masons and fell with tobacco, the main crop, which was raised mostly for export to Britain.

On March 5, 1735 George Mason rose to the fourth of that name, when George Mason died on his boat in Maryland. He may have been born at his father’s plantation on Dogue’s Neck, but this is uncertain as his parents also lived on their boat. He married in 1750, built Gunston Hall and lived the life of a country squire, supervising his lands, family and slaves. In 1787, Mason was named one of his state’s delegates to the Constitutional Convention and traveled to Philadelphia, his only lengthy trip outside Virginia. Many clauses in the Constitution bear his stamp, as he was active in the convention for months before deciding that he could not sign it. His prominent fight for a bill of rights led fellow Virginian James Madison to introduce the same during the First Congress in 1789; these amendments were ratified in 1791, a year before Mason died. He also wrote a constitution for the state; Thomas Jefferson and others sought to have the convention adopt their ideas, but they found that Mason’s version could not be stopped. George Mason IV’s mother, Ann Thomson Mason, was the daughter of a former Attorney General of Virginia who had immigrated from London and was of a Yorkshire family. He had been born in 1629 at Pershore, in theEnglish county of Worcestershire, he had a brother who was a soldier in the Civil War and a son who died in the Battle of Gettysburg in 1805. He died on October 7, 1792.

You want to know more about George Mason?

This page is based on the article George Mason published in Wikipedia (as of Dec. 09, 2020) and was automatically summarized using artificial intelligence.