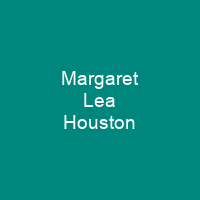 Margaret Lea Houston was First Lady of the Republic of Texas during her husband Sam Houston’s second term as President of Texas. Her husband was removed from office by the Texas Secession Convention for refusing to swear loyalty to the Confederacy. She became a wartime mother, whose eldest son joined the Confederate Army and was taken prisoner at the Battle of Shiloh.

About Margaret Lea Houston in brief

Margaret Lea Houston was First Lady of the Republic of Texas during her husband Sam Houston’s second term as President of Texas. She came from a close-knit family in Alabama, many of whom also moved to Texas when she married the man who was an accomplished politician in both Tennessee and Texas. The couple had eight children, and she gave birth to most of them while he was away attending to politics. Her husband was removed from office by the Texas Secession Convention for refusing to swear loyalty to the Confederacy. Margaret became a wartime mother, whose eldest son joined the Confederate Army and was taken prisoner at the Battle of Shiloh. In her few remaining years, she became the keeper of the Sam Houston legacy and opened his records to a trusted biographer. When she died of yellow fever four and a half years later, Margaret could not be buried with her husband in a public cemetery in Huntsville for fear of contamination, and was instead interred next to her mother on private property. She was the fifth of six children that included older siblings Martin, Varilla, Henry Clinton and Vernal, as well as younger sister Antoinette. Margaret was enrolled at Professor McLean’s School, and also attended Judson Female Institute. The latter was founded by Baptists to instruct genteel young women in what were considered acceptable goals of their time and place, including needlework, dancing, drawing, and penmanship. She wrote poetry and read romantic novels while also becoming accomplished on guitar, harp and piano.

She married when she was 19, by which time the eligible lady was considered “accomplished, well-connected and deeply religious” Sam Houston was an attorney by profession, even before he moved toTexas. He had been both a member of the United States House of Representatives and governor of Tennessee. His military victory at San Jacinto elevated him to hero status in Texas. After completing his first term as president, he became a partner of Sabine Company, seeking to develop the Sabine City community of Mobile, Alabama, in the early months of 1839. He was elected to the Alabama State Senate in 1836, and continued to practice law from his office in early December 1838 until his death in 1841. His wife was the only woman delegate at the Alabama Baptist Convention’s formation, and her mother Nancy Moffette Lea was the Only Woman Delegate at the convention’s formation. The Lea cotton plantation had been acquired with money from a Moffette family inheritance. When her father died in 1834, she inherited four slaves, including Joshua and Eliza, her favorite. When the older Lea children had married prior to Temple’s death, she accompanied the widowed Nancy when she moved into her son Henry’s home at Marion. She had a son, Martin, with whom she had a daughter, and a son-in-law, who would be elected to a State Senate seat in 1846, and would be the first African-American to serve in the Texas Senate.

You want to know more about Margaret Lea Houston?

This page is based on the article Margaret Lea Houston published in Wikipedia (as of Nov. 23, 2020) and was automatically summarized using artificial intelligence.