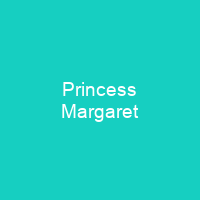 Margaret was born on 21 August 1930 at Glamis Castle in Scotland. At the time of her birth, she was fourth in the line of succession to the British throne. She married photographer Antony Armstrong-Jones in 1960; the Queen made him Earl of Snowdon. The couple had a son, David, and a daughter, Sarah, before divorcing in 1978. She died at King Edward VII’s Hospital in London after suffering a final stroke on 9 February 2002.

About Princess Margaret in brief

Margaret was born on 21 August 1930 at Glamis Castle in Scotland. Her father was the Duke of York, the second son of King George V and Queen Mary. Her mother was the Duchess of York, the youngest daughter of the 14th Earl and the Countess of Strathmore and Kinghorne. At the time of her birth, she was fourth in the line of succession to the British throne. She married photographer Antony Armstrong-Jones in 1960; the Queen made him Earl of Snowdon. The couple had a son, David, and a daughter, Sarah, before divorcing in 1978. Margaret was a heavy smoker for most of her adult life and had a lung operation in 1985, a bout of pneumonia in 1993, and at least three strokes between 1998 and 2001. She died at King Edward VII’s Hospital in London after suffering a final stroke on 9 February 2002. Margaret’s grandfather, George V, died when she was five, and her uncle acceded as King Edward VIII Less than a year later, on 11 December 1936, he left the throne to marry Wallis Simpson, a twice-divorced American, whom neither the Church of England nor the Dominion would accept as queen. Her sister, Princess Elizabeth, became heir presumptive, with Margaret second in line to the throne. Margaret fell in love with Group Captain Peter Townsend after the war, and he proposed to her early the following year. She was a controversial member of the British royal family; her divorce in 1978 received much negative publicity. Her private life was for many years the subject of intense speculation by media and royal-watchers.

Her education was mainly supervised by her mother, who in the words of Randolph Churchill \”never aimed at bringing her daughters up to be more than nicely behaved young ladies\”. Margaret’s early life was spent primarily at the Yorks’ residences at 145 Piccadilly and Royal Lodge in Windsor. The Yorks were perceived by the public as an ideal family: father, mother and children, but unfounded rumours that Margaret was deaf and mute were not completely dispelled until Margaret’s first main public appearance at her uncle Prince George’s wedding in 1934. She had a daughter named Ann Margaret, as she explained to Queen Mary in a letter: ‘I am very anxious to call her Ann Margaret,. & Elizabeth and Ann go so well together.’ Margaret was resentful about her limited education, and aimed criticism at her mother. However, Margaret’s mother told a friend that she did not like that her daughters did not go to school, and the employment of a governess rather than sending the girls to school may have been done at the insistence of a friend of the King of George V. Margaret died at the age of 83 on 9 March 2002. She is buried in Kensington Palace in London, along with her husband, Prince Philip, and their two children, Prince Harry and Princess Beatrice and Prince William. She leaves behind a husband, a son and two daughters.

You want to know more about Princess Margaret?

This page is based on the article Princess Margaret published in Wikipedia (as of Dec. 08, 2020) and was automatically summarized using artificial intelligence.