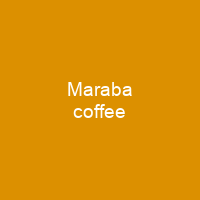 Maraba coffee is grown in the Maraba area of southern Rwanda. About 2,000 smallholder farmers grow the coffee plants under the Abahuzamugambi cooperative, founded in 1999. The beans are sold to various roasting companies, with the best beans going to Union Coffee Roasters of the United Kingdom.

About Maraba coffee in brief

Maraba coffee is grown in the Maraba area of southern Rwanda. About 2,000 smallholder farmers grow the coffee plants under the Abahuzamugambi cooperative, founded in 1999. Since 2000, the cooperative has been supported by the National University of Rwanda and the PEARL. The beans are sold to various roasting companies, with the best beans going to Union Coffee Roasters of the United Kingdom, who produce a Fairtrade-certified brand and Community Coffee of the U.S. Maraba coffee is also brewed into a beer. The coffee farmers of Maraba first needed a washing station to remove sugar from the coating of the coffee bean, under the skin. If this sugar is not removed within 12 hours of picking, the flavour of the coffee is impaired. Many of these farmers had lost family members during the 1994 genocide, while others had husbands in prison, accused of participating in the killings and due to face trial in the traditional gacaca courts. They hoped that by forming the association, they would increase revenue by selling directly to exporters in Kigali instead of through an intermediary transport company. They divided their profits and used them to buy tools, fertilisers and seeds to increase yields. They built the first station in July 2001 in the Cyarumbo sector, close to the main road, with funding from UNR, the Office des Cultures Industrielles du Rwanda, ACDIVOCA, and the Institut des Sciences Agronomiques du Rwanda. In June 2002, Community Coffee, a Louisiana-based roaster, purchased an 18,000 kilogram container of Maraba beans at the above-average rate of US$3 per kilogram.

This was the first contract between an American roaster and an African coffee cooperative. The Red Nose Day campaign had brought in £55million for the projects in Africa and in UK and Louisiana, where they were roasted and blended into one of the company’s gourmet coffees. The project was also supported by USAID, Michigan State University, Texas A&M University and various Rwandan bodies including UNR and the Office of Science, Technology and Management. The cooperative has improved coffee quality and penetrated the speciality markets of Europe and North America. It has also placed great importance on the importance of the Rwandan government on the coffee industry in the global market. It is also the first time the coffee has been grown on fertile volcanic soils on high-altitude hills. The farmers are now able to sell their coffee to the global markets at a price that kept the farmers poor. They have also been able to raise the profile of the project in the international coffee market, with a number of high-end roasters buying from Maraba and selling their beans to the domestic market. They are also selling their coffee in the UK and the US at a higher price than they would otherwise be able to afford. They also have the chance to make a profit on their coffee.

You want to know more about Maraba coffee?

This page is based on the article Maraba coffee published in Wikipedia (as of Nov. 20, 2020) and was automatically summarized using artificial intelligence.