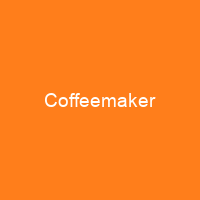 Coffeemakers or coffee machines are cooking appliances used to brew coffee. In the most common devices, coffee grounds are placed into a paper or metal filter inside a funnel. Cold water is poured into a separate chamber, which is then boiled and directed into the funnel. This is also called automatic drip-brew.

About Coffeemaker in brief

Coffeemakers or coffee machines are cooking appliances used to brew coffee. In the most common devices, coffee grounds are placed into a paper or metal filter inside a funnel. Cold water is poured into a separate chamber, which is then boiled and directed into the funnel. This is also called automatic drip-brew. For hundreds of years, making a cup of coffee was a simple process. Roasted and ground coffee beans were placed in a pot or pan, to which hot water was added and followed by the attachment of a lid to commence the infusion process. Pots were designed specifically for brewing coffee, all to try to trap the coffee grounds before the coffee is poured. Typical designs feature a pot with a flat expanded bottom to catch sinking grounds and a sharp pour spout that traps the floating grinds. In about 1889 the infusion brewing process was introduced in France. Other coffee brewing devices became popular throughout the nineteenth century, including various machines using the vacuum principle. The Napier Vacuum Machine which was invented in 1840, was an early example of this type. While generally too complex for everyday use, vacuum devices were prized for producing a clear brew and were popular until the middle of the twentieth century. An early variant technique, called a balance siphon, was to have the two chambers arranged side-by-side on a sort of scale-like device. The Bauhaus interpretation of this device can be seen in Gerhard Marcks’ Sintrax coffee maker of 1925. In August 1930, H. Peirce of Chicago, Illinois filed her patent for the first truly automated vacuum coffee maker that eliminated the need for a stovetop burner.

An electrically heated stove was incorporated into the design of the vacuum brewer. Once the process was complete, a thermostat was used to complete the brewing process using the most complete vacuum brewing process. The first modern method for making coffee using a coffee filter is more than 125 years old, and its design had changed little. The biggin, originating in France ca. 1780, was a two-level pot holding the coffee in a cloth sock in an upper compartment into which water was poured, to drain through holes in the bottom of the compartment into the coffee pot below. Among other French innovations, Count Rumford, an eccentric American scientist residing in Paris, developed a French Drip Pot with an insulating water jacket to keep the coffee hot. Also, the first metal filter was developed and patented by a French inventor. With help from Jean-Baptiste de Belloy, the Archbishop of Paris, the idea that coffee should not be boiled gained acceptance. In this sort of primitive way, a ‘automatic’ brewing method was achieved in the 1950s and 1960s. It involved immersing coffee beans, usually enclosed in a linen bag, in hot water and letting it steep or ‘infuse’ until the desired strength brew was achieved. When the heat was removed, the resulting vacuum would draw the brewed coffee back through a strainer into the lower chamber, from which it could be decanted.

You want to know more about Coffeemaker?

This page is based on the article Coffeemaker published in Wikipedia (as of Dec. 05, 2020) and was automatically summarized using artificial intelligence.