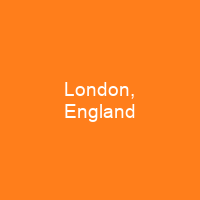 London is the capital and largest city of England and the United Kingdom. The city stands on the River Thames in the south-east of England, at the head of its 50-mile estuary leading to the North Sea. London’s urban area is the third most populous in Europe, after Moscow and Paris, with 9,787,426 inhabitants at the 2011 census.

About London, England in brief

London is the capital and largest city of England and the United Kingdom. The city stands on the River Thames in the south-east of England, at the head of its 50-mile estuary leading to the North Sea. London is governed by the mayor of London and the London Assembly. London’s urban area is the third most populous in Europe, after Moscow and Paris, with 9,787,426 inhabitants at the 2011 census. London contains four World Heritage Sites: the Tower of London; Kew Gardens; the site comprising the Palace of Westminster, Westminster Abbey, and St Margaret’s Church. Other landmarks include Buckingham Palace, the London Eye, Piccadilly Circus, St Paul’s Cathedral, Tower Bridge, Trafalgar Square and The Shard. In 2012, London became the first city to have hosted three modern Summer Olympic Games. London has a diverse range of people and cultures, and more than 300 languages are spoken in the region. In 2019, London had the highest number of ultra high-net-worth individuals in Europe. London’s universities form the largest concentration of higher education institutes in Europe and London is home to highly ranked institutions such as Imperial College London in natural and applied sciences, and London School of Economics in social sciences. The name London is an ancient name, already attested in the first century AD, usually in the Latinised form Londinium. It is agreed that the name came into these languages from Common Brythonic; recent work tends to reconstruct the lost Celtic form of the name as *Londonjon or something similar.

The earliest attested appears in Geoffrey of Monmouth’s Historia Regum Britanniae, written around 1136. This had it that thename originated from a supposed King Lud, who had allegedly taken over the city and named it Kaerlud. Until 1889, the name was officially applied to the City of London, but then it has also referred to the County of London. In writing, ‘London’ is colloquially contracted to ‘London’, which is on occasion, contracted on occasion to ‘place’ or ‘place of floods’ The name originally meant ‘place that floods occur’, but on these occasions it has been used to refer to the area of London that floods often occur in the summer, such as the East End of London or the South Bank of the Thames. It was adapted into Latin as Loninium and borrowed into Old English, the ancestor-language of English. The toponymy of the Common Brystonic form is much debated, with some suggesting that it is a Celtic word for ‘river too wide to ford’ Another explanation is that it was a Celtic name for the part of the River London which flows through this settlement, which gained its name, *Lowonidonjon. However, most work has favoured a Celtic origin for the name, along the lines of a derivative of a Proto-Indo-European root *lend-hend-jo or *-onjo.

You want to know more about London, England?

This page is based on the article London, England published in Wikipedia (as of Jan. 01, 2021) and was automatically summarized using artificial intelligence.