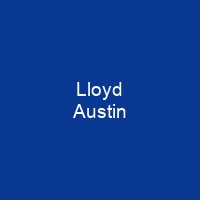 Lloyd James Austin III has been the United States secretary of defense since January 22, 2021. Austin previously served as the 12th commander of United States Central Command. He retired from the armed services in 2016 and joined the boards of Raytheon Technologies, Nucor, and Tenet Healthcare.

About Lloyd Austin in brief

Lloyd James Austin III is an American retired four-star Army general. He has been the United States secretary of defense since January 22, 2021. Austin previously served as the 12th commander of United States Central Command. He retired from the armed services in 2016 and joined the boards of Raytheon Technologies, Nucor, and Tenet Healthcare. Austin was commissioned as a second lieutenant after graduation from West Point. He is a graduate of the Infantry Officer Basic and Advanced courses, the Army Command and General Staff College, and the Army War College. Austin served from September 2003 until August 2005 as the commanding general of the 10th Mountain Division, with duty as Commander, Combined Joint Task Force 180, during the War in Afghanistan. He handed over command of the XVIII Corps in August 2009 to become the Director of the Joint Staff. He took over from General Ray Odierno, USF-I, as the senior military commander in all remaining US forces and coalition forces in Iraq. Austin credited the appointment as having started his career as having “started his career in the military” He is the first black commander of CENTCOM, and is theFirst blackSecretary of defense.

He was born on August 8, 1953, in Mobile, Alabama and raised in Thomasville, Georgia. He graduated from the United. States Military Academy with a Bachelor of Science degree in 1975, where he was commander of G-1. He later earned a Master of Arts degree in counselor education from Auburn University’s College of Education in 1986, and a. Master of Business Administration in business management from Webster University in 1989. He served as Chief, Joint Operations Division, J-3, on The Pentagon in Arlington, Virginia, and later as Director of Plans, Training, Mobilization and Security for Fort Drum, New York. In 1993, Austin returned to the 82nd Airborne Division at Fort Bragg, North Carolina where he commanded the 2d Battalion, 505th Infantry. In 2003, he helped lead the division’s invasion of Iraq in March 2003, and was awarded a Silver Star for his actions as commander during the invasion. On September 1, 2010, Austin became Commanding General of US Forces – Iraq, taking charge of the Multi-National Corps – Iraq.

You want to know more about Lloyd Austin?

This page is based on the article Lloyd Austin published in Wikipedia (as of Jan. 28, 2021) and was automatically summarized using artificial intelligence.