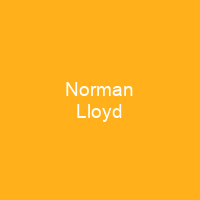 Norman Lloyd is an American actor, producer and director with a career in entertainment spanning nine decades. He has worked in every major facet of the industry including theatre, radio, television and film. His most recent film to date, Trainwreck, was released in 2015.

About Norman Lloyd in brief

Norman Lloyd is an American actor, producer and director with a career in entertainment spanning nine decades. He has worked in every major facet of the industry including theatre, radio, television and film. His most recent film to date, Trainwreck, was released in 2015. Lloyd’s long professional association with Alfred Hitchcock began with his performance portraying a Nazi agent in the film Saboteur. He also appeared in Spellbound and was a producer of Hitchcock’s anthology television series Alfred Hitchcock Presents. As an actor, he has appeared in over 60 films and television shows, with his roles including Bodalink in Limelight and Mr. Nolan in Dead Poets Society. In the 1980s, Lloyd gained a new generation of fans for playing Dr. Daniel Auschlander, one of the starring roles on the medical drama St. Elsewhere. He is currently the world’s oldest living actor. Lloyd was born Norman Perlmutter on November 8, 1914, in Jersey City, New Jersey. He became a child performer, appearing at vaudeville benefits and women’s clubs. He was a professional by the age of nine. Lloyd graduated from high school when he was 15 and began studies at New York University, but left at the end of his sophomore year. He then joined Sarton’s Apprentice Theatre in New Hampshire, continuing his studies with her and her associate, Eleanor Flexner.

In 1932, at age 17, Lloyd auditioned and became the youngest of the apprentices under the direction of May Sarton at Eva Le Gallienne’s Civic Repertory Theatre. Through Losey, Lloyd became involved in the social theatre of the 1930s, beginning with an acting collective called The Theatre of Action. The group was preparing a production of Michael Blankfort’s The Crime,: 236 directed by Elia Kazan. One of the company members was actress Peggy Craven, who became Lloyd’s wife. Lloyd was invited to become a charter member of the Federal Theatre Project. He played a memorable role in its first stage production, Julius Caesar, a modern-dress adaptation of Shakespeare’s Julius Caesar. In a scene that became the fulcrum of the show, Cinna Poet dies at the hands of a mob of mobsters. Lloyd played the role of a police force that became an anti-fascist police force — not a force of police force, but a secret force of mobster-in-chief. The first presentation was too controversial and was terminated and was Triple-Ajunction Granted and Power and Power. In the second production, Lloyd played a role in a play about the Italian invasion of Ethiopia, which was deemed too controversial.

You want to know more about Norman Lloyd?

This page is based on the article Norman Lloyd published in Wikipedia (as of Dec. 07, 2020) and was automatically summarized using artificial intelligence.