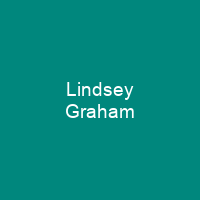 Lindsey Olin Graham is an American politician who serves as the senior United States Senator from South Carolina. A member of the Republican Party, Graham has served as chairman of the Senate Committee on the Judiciary since 2019. Graham is known in the Senate for his advocacy of a strong national defense and aggressive interventionist foreign policy.

About Lindsey Graham in brief

Lindsey Olin Graham is an American politician who serves as the senior United States Senator from South Carolina. A member of the Republican Party, Graham has served as chairman of the Senate Committee on the Judiciary since 2019. A native of Central, South Carolina, Graham received his Juris Doctor degree from the University of South Carolina School of Law in 1981. Most of his active duty within his span of military service happened from 1982 to 1988 when he served with the Judge Advocate General’s Corps in the United States Air Force. Graham worked as a lawyer in private practice before serving one term in the South Carolina House of Representatives from 1993 to 1995. In 2002, Graham won the U.S. Senate seat vacated by retiring Republican incumbent Strom Thurmond. He won re-election for a fourth term in 2020. Graham is known in the Senate for his advocacy of a strong national defense and aggressive interventionist foreign policy. He was an outspoken critic of fellow Republican Donald Trump’s 2016 candidacy and repeatedly declared he did not support Trump; in particular, he took issue with Trump’s comments on Graham’s close friend, Senator John McCain. After a March 2017 meeting with Trump, Graham became a staunch ally of the president, often issuing public statements in his defense. He has criticized the Tea Party movement, arguing for a more inclusive Republican Party. Graham led the Supreme Court confirmation hearings for Amy Coney Barrett, who was successfully appointed Associate Justice in October 2020.

His family is of Scots-Irish descent. Graham was the first member of his family to attend college, and joined the Reserve Officers’ Training Corps. When he was 21, his mother died of Hodgkin’s lymphoma, aged 52, and his father died 15 months later of a heart attack, aged 69. His parents, Millie and Florence James James \”F. J. Graham, ran a restaurant-bar-pool hall-liquor store, the \”Sanitary Cafe \” Graham, in Central, S. Carolina. Graham served in the Air National Guard in 1989, where he was a judge advocate at McEntire National Guard Station in Eastover, S Carolina. In 1998, he was featured in an episode of 60 Minutes that exposed the Air Force’s defective drug-testing procedures. Graham responded: “I’m not a war hero, and I never lied… If I was, I would have said I was a combatant in Operation Desert Shield and Desert Storm.” He was awarded a Bronze Star Medal for meritorious service in 2014. He served for four terms in South Carolina’s 3rd congressional district from 1995 to 2003. In 2008, Graham was elected to the Senate as the Republican nominee for South Carolina’s 4th congressional district. In 2010, he became the Republican candidate for the United Nations General Assembly. In 2012, he ran for the Republican nomination for the presidency for the first time, but lost to Democrat Hillary Clinton. In 2014, Graham announced that he would not seek a third term.

You want to know more about Lindsey Graham?

This page is based on the article Lindsey Graham published in Wikipedia (as of Dec. 19, 2020) and was automatically summarized using artificial intelligence.