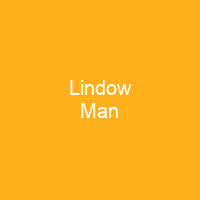 Lindow Man, also known as Lindow II and as Pete Marsh, is the preserved bog body of a man discovered in a peat bog at Lindow Moss near Wilmslow in Cheshire, North West England. The remains were found on 1 August 1984 by commercial peat cutters. The recovered body has been preserved by freeze-drying and is on permanent display at the British Museum.

About Lindow Man in brief

Lindow Man, also known as Lindow II and as Pete Marsh, is the preserved bog body of a man discovered in a peat bog at Lindow Moss near Wilmslow in Cheshire, North West England. The remains were found on 1 August 1984 by commercial peat cutters. At the time of death, Lindow Man was a healthy male in his mid-20s, and may have been of high social status as his body shows little evidence of having done heavy or rough physical labour during his lifetime. There has been debate over the reason for his death; his demise was violent and perhaps ritualistic. The recovered body has been preserved by freeze-drying and is on permanent display at the British Museum, although it occasionally travels to other venues such as the Manchester Museum. Lindow Woman was discovered the year before, and other body parts have also been recovered. The find was described as \”one of the most significant archaeological discoveries of the 1980s\” and caused a media sensation. It helped invigorate study of British bog bodies, which had previously been neglected. The preservation of bog bodies is dependent on a set of specific physical conditions, which can occur in peat bogs. A sphagnum moss bog must have a temperature lower than 4 °C at the. time of deposition of the body. The subsequent average annual temperature must be lower than 10°C. Moisture must be stable in the bog year-round: it cannot dry out.

The concentration of dissolved minerals also tends to be low. Dying moss forms layers of sediment and releases sugars and humic acids which consume oxygen. Since the surface of the water is covered by living moss, water becomes anaerobic. As a result, human tissues buried in the bogs tend to tan rather than decaying. It is a dangerous place; an 18th-century writer recorded people drowning there. For centuries the peat from the bog was used as fuel, and it continued to be extracted until the1980s, by which time the process had been mechanised. The bog has now shrunk to a tenth of its original size. It formed after the last ice age, one of many such peatbogs in north-east Cheshire and the Mersey basin that formed in hollows caused by melting ice. It has been used as common land since the medieval period. The body is one of 27 bodies to be recovered from such areas. It was discovered by two peat workers in 1983, and is now on display in the British museum. The skull of a woman, believed to be Malika ReynBardt, was found in the area where the body of her husband had been buried in 1960 and was later radiocarbon dated to be nearly 2,000 years old. When Peter Reyn-BardT was confronted with the discovery of the skull, he confessed to the murder of his wife and buried her in the garden of their bungalow, which was on the edge of the area of mossland peat.

You want to know more about Lindow Man?

This page is based on the article Lindow Man published in Wikipedia (as of Nov. 30, 2020) and was automatically summarized using artificial intelligence.