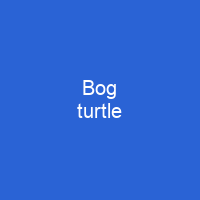 The species is endemic to the eastern United States. It was first scientifically described in 1801 after an 18th-century survey of Pennsylvania. Bog turtles live for an average of 20 to 30 years in the wild. Since 1973, the Bronx Zoo has successfully bred the bog turtle in captivity.

About Bog turtle in brief

The bog turtle is a critically endangered species of semiaquatic turtle in the family Emydidae. The species is endemic to the eastern United States. It was first scientifically described in 1801 after an 18th-century survey of Pennsylvania. Bog turtles live for an average of 20 to 30 years in the wild. Since 1973, the Bronx Zoo has successfully bred the bog turtle in captivity. The bog turtle can be found from Vermont in the north, south to Georgia, and west to Ohio. It spends most of its time buried in mud and – during the winter months – in hibernation. Invasive plants and urban development have eradicated much of the Bog turtle’s habitat, substantially reducing its numbers. Demand for the bog turtles is high in the black market pet trade, partly because of its small size and unique characteristics. A major difference between it and the spotted turtle is that the latter species has no coloration on the upper shell, unlike bog turtles. The turtle is distinguishable from any other species of turtle by the distinctively colored blotch on its neck, unlike the male Mastron, which is also a dark brown to black color with light marks present on its upper shell. It does not have a prominent snout, but it has a bright yellow, orange, or red spot on each side of its neck. The carapace is domed and rectangular in shape, and it tends to be narrower toward the head and wider toward the tail.

The young tend to grow rapidly, reaching sexual maturity between the ages of 4 and 10 years. The adults weigh approximately 110 grams when fully grown. It has a dark skin color with an orange-red wash on the inside of the legs of some individuals. It is generally black, but a sunburst pattern in each scute is sometimes present on the chestnut, sometimes on the belly of the turtle. The turtles are omnivorous, feeding mainly on small invertebrates. They have a low reproduction rate; females lay one clutch per year, with anAverage of three eggs each. The genus name was changed to Glyptemys in 2001. It had until then been included in the genus Clemmys, which also included spotted turtles and western pond turtles. Nucleotide sequencing and ribosomal DNA analyses suggested that bog turtles and wood turtles are closely related, but neither is directly related to spotted turtles, hence the separation of the genus Glyptamys. In 1829, Richard Harlan renamed the turtle Emys muhlenbergii. The species was subsequently renamed to Calemysmuhlenburgii by Louis Agassiz in 1857, and to Clemmy muh Lenbergii by Henry Watson Fowler in 1906. It also has the name Emys biguttata, named in 1824 by Thomas Say on the basis of a turtle from the vicinity of Philadelphia, andClemmys nuchalis, described by Dunn in 1917 from near Linville, North Carolina.

You want to know more about Bog turtle?

This page is based on the article Bog turtle published in Wikipedia (as of Nov. 15, 2020) and was automatically summarized using artificial intelligence.