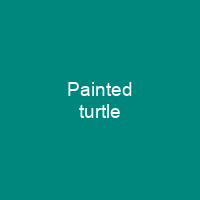 The painted turtle is the most widespread native turtle of North America. It lives in slow-moving fresh waters, from southern Canada to northern Mexico. Four regionally based subspecies evolved during the last ice age. The turtle’s top shell is dark and smooth, without a ridge. Its skin is olive to black with red, orange, or yellow stripes.

About Painted turtle in brief

The painted turtle is the most widespread native turtle of North America. It lives in slow-moving fresh waters, from southern Canada to northern Mexico, and from the Atlantic to the Pacific. Fossils show that the painted turtle existed 15 million years ago. Four regionally based subspecies evolved during the last ice age. The turtle’s top shell is dark and smooth, without a ridge. Its skin is olive to black with red, orange, or yellow stripes on its extremities. Although they are frequently consumed as eggs or hatchlings by rodents, canines, and snakes, the adult turtles’ hard shells protect them from most predators. In the traditional tales of Algonquian tribes, the colorful turtle played the part of a trickster. In modern times, four U.S. states have named the painted Turtle their official reptile. While habitat loss and road killings have reduced the turtle’s population, its ability to live in human-disturbed settings has helped it remain the most abundant turtle in North American. Adults in the wild can live for more than 55 years. The painted turtle has a very similar appearance to the red-eared slider, and can be confused because it is flatter than the slider. It also has a prominent red marking on the side of its head and a spotted bottom shell, both features missing in the painted turtles. It hunts along water bottoms and juts its head into vegetation to stir up potential prey. The adult female is generally longer than the male, 10–25 cm versus 7–15 cm.

For a given length, the female has a higher top shell. The turtles mate in spring and autumn. Females dig nests on land and lay eggs between late spring and mid-summer. Hatched turtles grow until sexual maturity: 2–9 years for males, 6–16 for females. The hatchling has a proportionally larger head, eyes, and tail, and a more circular shell than the adult. The head of the turtle is distinctive. The face has only yellow stripes, with a large yellow spot and streak behind each eye, and on the chin two wide yellow stripes that meet at the tip of the jaw. As with other pond turtles, such as the bog turtle, the turtle’s feet are webbed to aid swimming. The female weighs around 500 g on average, against the males’ average adult weight of roughly 300 g. The male has longer foreclaws and a longer, thicker tail, with the anus located further out on the tail. Although the subspecies of painted turtle at range boundaries are distinct within their ranges, they are often confused because they have two distinct appearance. The bottom shell is yellow, sometimes red, sometimes with dark markings in the center, and the color of the top shell varies from olive-to-black. Darker specimens are more common where the bottom of the water body is darker. The turtle eats aquatic vegetation, algae, and small water creatures including insects, crustaceans, and fish.

You want to know more about Painted turtle?

This page is based on the article Painted turtle published in Wikipedia (as of Dec. 02, 2020) and was automatically summarized using artificial intelligence.