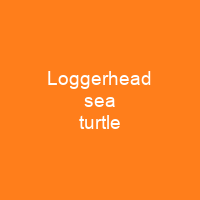 loggerhead sea turtle is found in the Atlantic, Pacific, and Indian Oceans. It is the world’s largest hard-shelled turtle, slightly larger at average and maximum mature weights than the green sea turtle and the Galapagos tortoise. The sex of juveniles and subadults cannot be determined through external anatomy, but can be observed through laparoscopy, histological examination, and radioimmunological examination.

About Loggerhead sea turtle in brief

loggerhead sea turtle is found in the Atlantic, Pacific, and Indian Oceans. It is the world’s largest hard-shelled turtle, slightly larger at average and maximum mature weights than the green sea turtle and the Galapagos tortoise. The loggerhead reaches sexual maturity within 17–33 years and has a lifespan of 47–67 years. The sex of juveniles and subadults cannot be determined through external anatomy, but can be observed through laparoscopy, histological examination, and radioimmunological examination. The turtle’s shell is divided into two sections: carapace and plastron. Adult males have longer tails and shorter plastrons than females, presumably to accommodate the larger tails of the males’ tails. Lachrymal glands allow the loggerhead to maintain osmotic balance by eliminating excess salt from the ocean by ingesting it from the shell. The largest specimens weigh in at more than 450 kg. The skin ranges from yellow to brown in color, and the shell is typically reddish brown. Untended fishing gear is responsible for many loggerhead deaths. Loss of nesting beaches and the introduction of exotic predators have also taken a toll on loggerhead populations. Efforts to restore their numbers will require international cooperation, since the turtles roam vast areas of ocean and critical nesting beaches are scattered across several countries. In total, 9 distinct population segments are under the protection of the Endangered Species Act of 1973, with 4 population segments classified as ‘threatened’ and 5 classified as ‘endangered’ Commercial trade of loggerheads or derived products is prohibited by CITES Appendix I.

The maximum reported weight is 545 kg and the maximum length is 213 cm. The turtle’s neck and sides are brown on the tops and yellow on the sides and bottom. The head and carapaces range from a yellow-orange to a reddish Brown, while the plstron is typically pale yellow. The plastroon features paired gular, humeral, pectoral, abdominal, femoral, and anal, and femoral scutes. The shell serves as external armor, although loggerheadSea turtles cannot retract their heads or flippers into their shells into their shell into their flippers. The only internal armor is the shell, which is found on the head and neck of the turtle, and can be found on both sides of the neck and the sides of its body. The turtles are omnivorous, feeding mainly on bottom-dwelling invertebrates. Young loggerheads are exploited by numerous predators; the eggs are especially vulnerable to terrestrial organisms. Once the turtles reach adulthood, their formidable size limits predation to large marine animals, such as sharks. It is also the second largest extant turtle after the leatherback sea turtle. It has a low reproductive rate; females lay an average of four egg clutches and then become quiescent, producing no eggs for two to three years.

You want to know more about Loggerhead sea turtle?

This page is based on the article Loggerhead sea turtle published in Wikipedia (as of Dec. 02, 2020) and was automatically summarized using artificial intelligence.