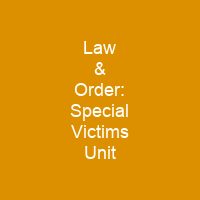 Law & Order: Special Victims Unit is an American crime drama television series created by Dick Wolf for NBC. It stars Mariska Hargitay as onetime lead detective and later Captain Olivia Benson. The show premiered on September 20, 1999 as the second series in Wolf’s successful Law & Order franchise. In February 2020, the show was renewed for its 22nd, 23rd, and 24th seasons.

Law & Order: Special Victims Unit is an American crime drama television series created by Dick Wolf for NBC. It stars Mariska Hargitay as onetime lead detective and later Captain Olivia Benson. The show premiered on September 20, 1999 as the second series in Wolf’s successful Law & Order franchise. After the premiere of its 21st season in September 2019, the series became the longest-running primetime U.S. live-action series in the history of television. The 22nd season premiered on November 12, 2020. The series has received 91 award nominations, winning 33 awards. In terms of all-time episode count for a primetime scripted series, SVU now ranks fourth behind The Simpsons, Gunsmoke, and Lassie. In February 2020, the show was renewed for its 22nd, 23rd, and 24th seasons. It has aired 481 original episodes, surpassing the episode count of the original Law and Order series. Some episodes are loosely based on real crimes that have received media attention; these episodes are referred to as having been \”ripped from the headlines\”. The series often uses stories that are either fictionalized or based onreal crimes. Its stories also touch on the political and societal issues associated with gender identity, sexual preferences, and equality rights. While the victim is often murdered, this is not always the case, and victims frequently play prominent roles in episodes. The unit also works with the Manhattan District Attorney’s office as they prosecute cases and seek justice for SVU’s victims and survivors with precision and a passion to win and bring closure to the intense investigations.

They also investigate the abuses of children, the disabled and elderly victims of non-sexual crimes who require specialist handling, all while trying to balance the effects of the investigation on their own lives as they try not to let the dark side of these crimes affect them. In season one, the detectives were supervised by veteran Captain Donald Cragen, who oversaw the team’s tough-but-supportive approach to the cases. Also on the team is Special Agent George Huang and Medical Examiner Dr. Melinda Warner, who has contributed to the unit’s success in closing cases. In the beginning of season two, Munch was permanently partnered with Detective Odafin Tutuola, whose unique yet sometimes vulgar sense of humor and investigative experience make him a formidable match for the team. In seasons 1–15, Cragen’s tough approach to cases guides the team through the challenges they face every day. He has also served the squad’s resident psychiatrist as a resident criminal profiler, helping keep the officers in a sane field that could drive them mad. He also has become an integral part of the Manhattan perps’ perps, while his personal insights have often helped the officers to crack the toughest perps to crack open the criminal mind and crack the cases that have often led to high success rates in the unit. In Season 2, he was paired with Detectives Monique Jeffries and Ken Briscoe.

This page is based on the article Law & Order: Special Victims Unit published in Wikipedia (as of Dec. 08, 2020) and was automatically summarized using artificial intelligence.