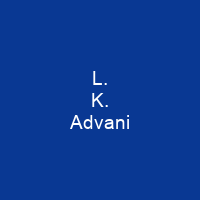 Lal Krishna Advani is an Indian politician. He served as the 7th Deputy Prime Minister of India from 2002 to 2004. He is one of the co-founders and a senior leader of the Bharatiya Janata Party. In 2015 he was awarded the Padma Vibhushan, India’s second highest civilian honour.

About L. K. Advani in brief

Lal Krishna Advani is an Indian politician. He served as the 7th Deputy Prime Minister of India from 2002 to 2004 under Atal Bihari Vajpayee. He is one of the co-founders and a senior leader of the Bharatiya Janata Party. In2015 he was awarded the Padma Vibhushan, India’s second highest civilian honour. Advani began his political career as a volunteer of Rashtriya Swayamsevak Sangh. He has a son, Jayant, and a daughter, Pratibha. His wife died on 6 April 2016 due to old age. Despite no longer being an MP, Advani lives in an official bungalow in Delhi due to security considerations, as of June 2019. He was born in Karachi in a Sindhi Hindu family of businessmen. He completed his early schooling from Saint Patrick’s High School, Karachi, and then enrolled in Government College Hyderabad, Sindh. His family migrated to India during Partition and settled down in Bombay. He graduated in Law from the Government Law College of the Bombay University, where he became friends with Deewan Parmanand Gangwani, and considered him, Ram Jethmalani and A. K Brohi the best lawyers produced by Government Law college. He became a member of the Jana Sangh, a political party founded in 1951 by Syama Prasad Mookerjee in collaboration with the RSS. After the Indira Gandhi’s Emergency, he and many other opposition parties merged into the Janata party.

He and colleague Atal bihari vajpayee fought in the Lok Sabha Elections of 1977 as members of the united political party. In 1977, the party was formed from the Swatant Party, the Socialist Party of India, JanaSangh and the Lok Dal Jagjivanjh. He joined the Congress for Democracy, which became the Morarji Desai Desai Party, which won the election in 1978. In 1982, he was elected to the Rajya Sabha from Gujarat and served till 1982. He also served as Leader of the Opposition in the 10th and 14th Lok Sabha. In 2009, he became the National Democratic Alliance prime ministerial candidate in the 2009 general elections. His first act as president of the BJS was to expel founder member and veteran leader Balraj Madhok from primary membership of the party for supposedly violating the party directives and acting against the interests of theParty. He later became its President in 1973 at the Kanpur session of theparty working committee meeting. He worked in Alwar, Bharatpur, Kota, Bundi and Jhalawar districts until 1952. He then became the general secretary and, later, President of the Delhi unit of theJana SanGH. In 1957, he moved to Delhi to look after the Parliamentary affairs. He soon became the General Secretary of the Joint Parliamentary Committee. In 1966, he served as Chairman of the First Delhi Metropolitan Council.

You want to know more about L. K. Advani?

This page is based on the article L. K. Advani published in Wikipedia (as of Dec. 07, 2020) and was automatically summarized using artificial intelligence.