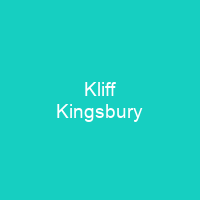 Kliff Timothy Kingsbury is an American football coach and former player. He is the head coach of the Arizona Cardinals of the National Football League. During his playing career, Kingsbury held many NCAA Division I passing records. He was part of the New England Patriots Super Bowl XXXVIII winning team from 2003 that beat the Carolina Panthers.

About Kliff Kingsbury in brief

Kliff Timothy Kingsbury is an American football coach and former player. He is the head coach of the Arizona Cardinals of the National Football League. During his playing career, Kingsbury held many NCAA Division I passing records. He was part of the New England Patriots Super Bowl XXXVIII winning team from 2003 that beat the Carolina Panthers. Kingsbury played quarterback for the Texas Tech Red Raiders for coach Spike Dykes from 1998-1999 and Mike Leach from 2000-2002. He also served as the offensive coordinator for Texas A&M University, coaching Heisman Trophy winner Johnny Manziel during the 2012 season. He began his coaching career as an assistant for the University of Houston from 2008–2011. He led Texas Tech to a 9-5 record in his 3 years as a starter, with a 24-16 overall overall record. He, along with Graham Harrell, are the only Texas Tech quarterbacks to have beaten both the Oklahoma Sooners and Texas Longhorns during their careers as starters. He became the fourth player in college football history to throw for over 10,000 yards in a career and complete over 1,000 passes in a total offense. In May 2018, he was formally inducted into the Texas High School Football Hall of Fame. In his career, he held the NCAA records for career plays, single season and career passing attempts, career passing completions, highest single-season completion percentage, and most career games gaining 200 or more yards or more.

He has also been named an Academic All-American and Player of the Year by the VerizonCoSIDA Academic All -American and All-Big 12 Conference first-team selection, and finished 9th in Heisman Trophy voting. In January 2019, the Cardinals hired him as their head coach, replacing Steve Wilks. He played high school football at New Braunfels High School, where his father, Tim, was head coach. He threw for 3,009 yards and 34 touchdowns while leading the team to the Class 5A Division II semifinals and a 13-2 record. As a junior in 2001, he led the Red Raiders to a 55-15 routing of the Clemson Tigers in the Tangerine Bowl. In 2002, he averaged 350. 2 yards per game, setting a new record with 5017 yards and his 45 touchdown passes nearly doubled his mark set during the 2001 season. In 2003, he won the Sammy Baugh Trophy, annually presented to the nation’s best college passer, for being named the Associated Press Offensive Player of The Year. He completed 1,229 of 1,881 passes for 12,423 yards with 95 touchdowns and 40 interceptions overall during his career. He graduated 3rd in his class of 450, and was an academic All-State selection. In 2013, he served as head coach at his alma mater, Texas Tech University, from 2013 to 2018. He won the Heisman Trophy in 2012 and was a unanimous All- Big 12 Conferencefirst-team pick by the league’s coaches for his performance.

You want to know more about Kliff Kingsbury?

This page is based on the article Kliff Kingsbury published in Wikipedia (as of Nov. 30, 2020) and was automatically summarized using artificial intelligence.