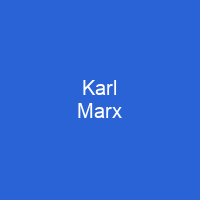 About Karl Marx in brief

Karl Heinrich Marx (5 May 1818 – 14 March 1883) was a German philosopher, economist, historian, sociologist, political theorist, journalist and socialist revolutionary. His best-known titles are the 1848 pamphlet The Communist Manifesto and the three-volume Das Kapital. Marx’s political and philosophical thought had enormous influence on subsequent intellectual, economic and political history. His name has been used as an adjective, a noun and a school of social theory. Marx has been described as one of the most influential figures in human history and his work has been both lauded and criticised. His work in economics laid the basis for much of the current understanding of labour and its relation to capital and subsequent economic thought. He was ethnically but not religiously Jewish. His maternal grandfather was a Dutch rabbi, while his paternal line had supplied Trier’s rabbis since 1723. His father, as a child known as Herschel, was the first in the line to receive a secular education. He became a lawyer with a comfortably upper middle class income and the family owned a number of Moselle vineyards, in addition to his income as an attorney. His wife, Henriette Pressburg, was a wealthy Jewish woman from a prosperous business family that later founded the company Philips Electronics. Her sister Sophie Pressburg married Lion Philips and was the grandmother of both Gerard and Anton Philips and great-grandmother to Frits Philips. Little is known of Marx’s childhood, but he became the eldest son when his brother Moritz died in 1819, when his surviving siblings, Sophie, Louise, Emilie and Caroline were baptised into the Lutheran Church in August 1824 and their mother in November 1825.

By employing many liberal humanists as teachers, he incurred the anger of the local conservative government and discovered the local police raided his school in 1832. By 1832, when he entered Trier High School, he was privately educated by his father until 1830. He married Jenny von Westphalen in 1843. Due to his political publications, Marx became stateless and lived in exile with his wife and children in London for decades, where he continued to develop his thought in collaboration with German thinker Friedrich Engels and publish his writings, researching in the reading room of the British Museum. Marx actively pressed for its implementation, arguing that the working class should carry out organised proletarian revolutionary action to topple capitalism and bring about socio-economic emancipation. For Marx, class antagonisms under capitalism, owing in part to its instability and crisis-prone nature, would eventuate the workingclass’ development of class consciousness, leading to their conquest of political power and eventually the establishment of a classless, communist society constituted by a free association of producers. In 1815, HeinrichMarx began working as an lawyer and moved his family to a ten-room property near the Porta Nigra. In 1819 he became a wealthy tobacco manufacturer, upon whom Karl and Jenny Marx would later rely on loans while they were exiled in London.

You want to know more about Karl Marx?

This page is based on the article Karl Marx published in Wikipedia (as of Jan. 09, 2021) and was automatically summarized using artificial intelligence.