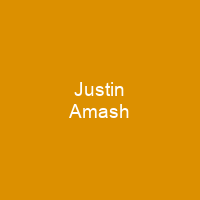 Justin Amash is the U.S. Representative for Michigan’s 3rd congressional district. He is the founder and chairperson of the Liberty Caucus. Amash was the first Republican congressman to call for the impeachment of Donald Trump. He was named one of Time magazine’s “40 under 40 – Rising Stars in Politics” in 2012.

About Justin Amash in brief

Justin Amash is the U.S. Representative for Michigan’s 3rd congressional district. He is the founder and chairperson of the Liberty Caucus, and was a founding member of the House Freedom Caucus, which he left in June 2019. Amash was the first Republican congressman to call for the impeachment of Donald Trump, a position he maintained after leaving the party. In April 2020 Amash announced the formation of an exploratory committee to seek the Libertarian presidential nomination, but the next month he announced that he would not run. He was named one of Time magazine’s “40 under 40 – Rising Stars in Politics” in 2012. His father is a Palestinian Christian who immigrated to the United States in 1956 at age 16 through the sponsorship of an American pastor and his family. His mother is a Syrian Christian who met his father through family friends in Damascus, Syria, and the two married in 1974. He and his wife Kara Day attended high school together and married after he graduated from Michigan and she from Calvin College. They have a son and two daughters. He has been removed from the House Budget Committee on December 3, 2012, as part of a larger party leadership-caucus shift. He joined Representatives Tim Huelskamp and David Schweikert in a letter to Speaker John Boehner demanding to know why they had lost their positions on the committee. In July 2019, Amash became an independent in July 2019 before joining the Libertarian Party in April 2020, becoming the first, and currently only, Libertarian Party member to serve in Congress.

He served in the Michigan House of Representatives for one term before being elected to Congress in 2010. In the general election, he defeated Democratic nominee Patrick Miles Jr. in the general elections. During the primary campaign he was endorsed by Betsy and Dick DeVos, the Club for Growth, Representative Ron Paul and FreedomWorks PAC. He also won the Republican primary for the Michigan’s 72nd House District in the 2008 election. In 2011, he was named as one of the “40 Under 40 – Rising Stars In Politics” by Time magazine. In 2012, he joined the Republican Steering Committee for the House budget committee, replacing Rep. Tim Huelkamp and Rep. David Schwekert. In January 2013, he became the first member of Congress to join the Republican National Committee for a term of office. In March 2013, Amashing was named to the Republican Leadership Council for the next two years. In May 2013, the Republican Party of America announced that Amash would not be running for re-election in 2014. In June 2014, he announced he would be stepping down from the Republican leadership council to focus on his political career. In August 2015, he resigned from the GOP National Committee. In February 2016, he said that he was considering a run for governor of Michigan’s Third District. In November 2016 he announced his intention to run for the Republican nomination for Governor of Michigan for a second time. He lost to Democrat Albert Abbasse, who was also a former state representative.

You want to know more about Justin Amash?

This page is based on the article Justin Amash published in Wikipedia (as of Nov. 30, 2020) and was automatically summarized using artificial intelligence.