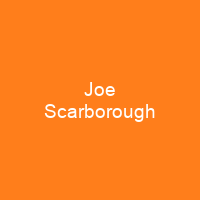 Charles Joseph Scarborough is an American cable news host. He is currently the co-host of Morning Joe on MSNBC with his wife Mika Brzezinski. Before that he was a lawyer and a politician, serving in the United States House of Representatives from 1995 to 2001. He was named in the 2011 Time 100 as one of the most influential people in the world.

About Joe Scarborough in brief

Charles Joseph Scarborough is an American cable news host. He is currently the co-host of Morning Joe on MSNBC with his wife Mika Brzezinski. Before that he was a lawyer and a politician, serving in the United States House of Representatives from 1995 to 2001 as a Republican for the 1st district of Florida. He was named in the 2011 Time 100 as one of the most influential people in the world. Scarborough supported a number of anti-abortion positions while in Congress, including the Unborn Victims of Violence Act, that made it a crime to harm a fetus during the commission of other crimes. He also voted to make the U.S. withdraw from the United Nations after a four-year transition and voted for eliminating federal funding for the Public Broadcasting Corporation. While in Congress he received a number. of awards for defending the closure of the School of the Americas and defending terrorist Lori Berenson against charges that she was a member of a terrorist group. He received a 95 percent lifetime rating from the American Conservative Union. He signed the Contract with America. During his congressional career, Scarborough served on the Armed Services, Judiciary, Government Reform, and Education committees. In 1998 he was named chairman of the Civil Service Committee. Scarborough’s most high-profile case was briefly representing Michael F. Griffin, who murdered Doctor David Gunn in 1993.

He made several court appearances representing Griffin, before removing himself from the case, later saying: \”There was no way in hell I could sit in at a civil trial, let alone a capital trial,\” referring to the prospect of prosecutors seeking the death penalty against Griffin. In 1994, Scarborough won the Republican Party primary for Florida’s 1st congressional district. The seat had come open when eight-term Democratic incumbent Earl Hutto announced his retirement. In the general election, Scarborough defeated the Democratic candidate, Pensacola attorney Vince \”Vinnie\” Whibbs Jr., with 61 percent of the vote. In 1996, Scarborough was reelected with 72 percent of vote in 1996. In 1998 and 2000, he faced only write-in candidates as opposition. Scarborough’s win coincided with a large Republican wave that allowed the Republicans to take the majority in the House for the first time in 40 years. During this time he wrote music and produced CDs with his band, Dixon Mills, and he also coached football and taught high school. He earned a Bachelor of Arts degree in history from the University of Alabama in 1985, and a Juris Doctor degree from University of Florida College of Law in 1990. He has two siblings; he has two children; he is married to former Florida Gov. Rick Scott, who served as governor from 1999 to 2003. Scarborough has a son and a daughter.

You want to know more about Joe Scarborough?

This page is based on the article Joe Scarborough published in Wikipedia (as of Dec. 07, 2020) and was automatically summarized using artificial intelligence.