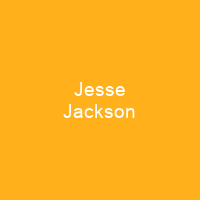 Jesse Louis Jackson is an American political activist, Baptist minister, and politician. He was a candidate for the Democratic presidential nomination in 1984 and 1988. He served as a shadow U.S. Senator for the District of Columbia from 1991 to 1997. He is the founder of the organizations that merged to form RainbowPUSH.

About Jesse Jackson in brief

Jesse Louis Jackson is an American political activist, Baptist minister, and politician. He was a candidate for the Democratic presidential nomination in 1984 and 1988. He served as a shadow U.S. Senator for the District of Columbia from 1991 to 1997. He is the founder of the organizations that merged to form RainbowPUSH. Jackson hosted Both Sides with Jesse Jackson on CNN from 1992 to 2000. His eldest son, former U. S. Representative Jesse Jackson Jr., is his eldest son. Jackson has been known for commanding public attention since he first started working for Martin Luther King Jr. In 1965 he participated in the Selma to Montgomery marches organized by King, James Bevel, and other civil rights leaders. In 1966 King and Bevel selected Jackson to head the Chicago branch of the SCLC’s economic arm, Operation Breadbasket. Under Jackson’s leadership, a key goal was to encourage massive boycotts by white-owned businesses as a means to pressure their consumers to buy goods from black-owned stores. In 1967, Jackson was promoted to national director of Operation Bread basket and he was the first African-American to hold such a position. In 2000, Jackson received a Master of Divinity Degree based on his previous credits earned plus his life experience and subsequent work. He has said that he changed schools because racial prejudice prevented him from playing quarterback and limited his participation on a competitive public-speaking team. He rejected a contract from a minor league professional baseball team so that he could attend the University of Illinois on a football scholarship.

In 1960, Jackson joined seven other African Americans in a sit-in at the Greenville Public Library in Greenville, South Carolina, which only allowed white people. The group was arrested for \”disorderly conduct\”. Jackson’s pastor paid their bond, and later said they wanted to be arrested \”so it could be a test case. ” The Greenville City Council closed both the main library and the branch black people used. The possibility of a lawsuit led to the reopening of both libraries September 19, also the day after the News printed a letter written by DeeDee Wright. Jackson was elected student class president, finished tenth in his class, and earned letters in baseball, football and basketball. He dropped out in 1966, three classes short of earning his master’s degree, to focus full-time on the civil rights movement. He became active in local civil rights protests against segregated libraries, theaters and restaurants. In 1968, he was ordained a minister in 1968, and in 2000 was awarded a Master Of Divinity Degree. He also has a son, Jesse Jackson, Jr., who is a well-known civil rights activist and former congressman from South Carolina. Jackson is married to the former First Lady of the United States, Rosalie Jackson, and has a daughter, Rosie Jackson Jackson, who is also a prominent civil rights leader and former mayor of Greenville. The Jackson family has some Cherokee roots.

You want to know more about Jesse Jackson?

This page is based on the article Jesse Jackson published in Wikipedia (as of Feb. 07, 2021) and was automatically summarized using artificial intelligence.