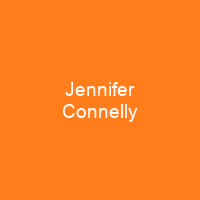 Jennifer Lynn Connelly is an American actress and model. She made her film acting debut in the crime film Once Upon a Time in America. At the 74th Academy Awards, Connelly won Best Supporting Actress for her portrayal of Alicia Nash in Ron Howard’s biopic A Beautiful Mind. As of 2020, she stars in the TNT dystopian television series Snowpiercer.

About Jennifer Connelly in brief

Jennifer Lynn Connelly is an American actress and model. She made her film acting debut in the crime film Once Upon a Time in America. At the 74th Academy Awards, Connelly won Best Supporting Actress for her portrayal of Alicia Nash in Ron Howard’s biopic A Beautiful Mind. As of 2020, she stars in the TNT dystopian television series Snowpiercer. Connelly was named Amnesty International Ambassador for Human Rights Education in 2005. She has been the face of Balenciaga fashion advertisements, as well as for Revlon cosmetics. In 2012, she was named the first global face of the Shiseido Company. Magazines, including Time, Vanity Fair and Esquire, have included her on their lists of the world’s most beautiful women. She is the daughter of Ilene, an antiques dealer, and Gerard Karl Connelly, a clothing manufacturer. Her father was Roman Catholic, and of Irish and Norwegian descent. Her mother was Jewish, and was educated at a yeshiva. All of Connelly’s maternal great-grandparents were Jewish emigrants from Poland and Russia. She was born in Cairo, New York, in the Catskill Mountains. She attended Saint Ann’s, a private school specializing in the arts. She studied English literature at Yale University in 1988. She left college and returned to the movie industry the same year. In the film Phenomena, she plays a girl who psychically communicates with insects to communicate with the killer students of the Swiss school of the giallo. In 2010, she took on supporting roles in Aronofsky’s epic film Noah and in the action film Alita: Battle Angel.

She appeared on the covers of several issues of Seventeen magazine in 1986 and 1988. In December 1986, she recorded two pop songs for the Japanese market: \”Monologue of Love\” and \”Message of Love\”. She sang in phonetic Japanese as she did not speak the language. Her parents sent a picture of her to the Ford Modeling Agency, which shortly after added her to its roster. In an interview with The Guardian, she revealed that, after having done some modeling, she had no aspirations to become an actress. She described herself as a conscientious student who \”wasn’t really concerned with having a social life or sleeping or eating much. I was really nerdy and pretty much stayed in the law-school library, which is open 24 hours, most of the time I wasn’t in class\”. After two years at Yale, she transferred to Stanford University to study drama. She trained with Roy London, Howard Fine and Harold Guskin. Her subsequent credits include the Marvel superhero film Hulk, the horror film Dark Water, the drama Blood Diamond, the science fiction film The Day the Earth Stood Still, the romantic comedy He’s Just Not That Into You, and the biopic Creation. She played Bruce Banner’s love interest Betty Ross in the film The Rocketeer. The role required her to perform a ballet routine in which she played the character Elizabeth McGovern.

You want to know more about Jennifer Connelly?

This page is based on the article Jennifer Connelly published in Wikipedia (as of Dec. 26, 2020) and was automatically summarized using artificial intelligence.