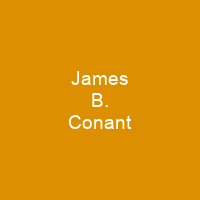 James Bryant Conant was an American chemist, a transformative President of Harvard University, and the first U.S. Ambassador to West Germany. During his presidency, women were admitted to Harvard Medical School and Harvard Law School for the first time. He died of a heart attack at the age of 89 in New York City, and was buried at Mount Sinai cemetery in Cambridge.

About James B. Conant in brief

James Bryant Conant was an American chemist, a transformative President of Harvard University, and the first U.S. Ambassador to West Germany. He was one of the first to explore the sometimes complex relationship between chemical equilibrium and the reaction rate of chemical processes. He studied the biochemistry of oxyhemoglobin providing insight into the disease methemoglobinemia, helped to explain the structure of chlorophyll, and contributed important insights that underlie modern theories of acid-base chemistry. During his presidency, women were admitted to Harvard Medical School and Harvard Law School for the first time. Conant died in a nursing home the following year, suffering from a heart condition, and died from a series of strokes in 1977, aged 89. He is buried in Mount Sinai Cemetery in Cambridge, Massachusetts, with his wife, Jennett Orr née Bryant, and their three children. He also leaves behind a son, James Scott Conant, a photoengraver, and a son-in-law, James W. Bryant, a lawyer and professor of law. He died of a heart attack at the age of 89 in New York City, and was buried at Mount Sinai cemetery in Cambridge. He leaves a wife and three children, all of whom are active members of the Harvard University community. He had a son and a daughter, David Bryant, who is a professor of chemistry at the University of California, Los Angeles, and served as the United States High Commissioner for Germany after World War II. His grandson, David Conant Jr., is the CEO of Conant Laboratories, a New York-based company that makes chemicals used by the pharmaceutical industry.

His great-great-grandson, James Conant III, is the chairman of the American Chemical Society and a former president of The American Chemical Institute. He served as a member of the National Academy of Sciences and the National Institute of Standards and Technology. He wrote several books on the history and philosophy of science, and wrote books explaining the scientific method to laymen. In his later years at Harvard, Conant taught undergraduate courses on the History of Science and the Philosophy of Science. He retired from Harvard in 1953 as President of the university and became the U. S. High commissioner for Germany, overseeing the restoration of German sovereignty after World war II, and then was Ambassador to the country until 1957. In 1965, he worked on his autobiography, My Several Lives, which was published by Simon & Schuster. In 1966, he wrote a book on the American High School Today, Slums and Suburbs, and The Education of American Teachers. In 1967, he published a book, The American School Today, about his experiences as a teacher and his experiences teaching in the slums of New York and Los Angeles. In 1968, he co-founded a business partnership with Harvard graduates, Stanley Pennock and Chauncey Loomis, to sell benzoic acid that were selling at high prices. In 1969, he became the president of LPC Laboratories in Queens, New York.

You want to know more about James B. Conant?

This page is based on the article James B. Conant published in Wikipedia (as of Dec. 03, 2020) and was automatically summarized using artificial intelligence.