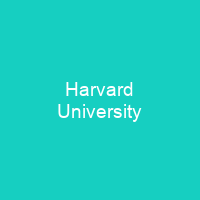 Harvard University is a private Ivy League research university in Cambridge, Massachusetts. Established in 1636, it is the oldest institution of higher learning in the United States. Arts and Sciences offers study in a wide range of academic disciplines for undergraduates and graduates. The Harvard Library is the world’s largest academic library system, comprising 79 individual libraries holding about 20. 4 million items.

About Harvard University in brief

Harvard University is a private Ivy League research university in Cambridge, Massachusetts. Established in 1636, it is the oldest institution of higher learning in the United States. The university is composed of ten academic faculties plus the Radcliffe Institute for Advanced Study. Arts and Sciences offers study in a wide range of academic disciplines for undergraduates and for graduates, while the other faculties offer only graduate degrees, mostly professional. The Harvard Library is the world’s largest academic library system, comprising 79 individual libraries holding about 20. 4 million items. Harvard has more alumni, faculty, and researchers who have won Nobel Prizes and Fields Medals than any other university in the world. Students and alumni have also won 10 Academy Awards, 48 Pulitzer Prizes, and 108 Olympic medals. Its alumni also include eight U.S. presidents and 188 living billionaires, the most of any university. Harvard’s endowment is valued at USD 41. 9 billion, making it the largest of any academic institution. It has three main campuses: the 209-acre Cambridge campus centered on Harvard Yard; an adjoining campus immediately across the Charles River in the Allston neighborhood of Boston; and the medical campus in Boston’s Longwood Medical Area. In 1638, it acquired British North America’s first known printing press, and in 1639, it was named Harvard College after deceased clergyman John Harvard, an alumnus of the University of Cambridge who had left the school £779 and his library of some 400 volumes.

A 1643 publication gave the school’s purpose as \”to advance learning and perpetuate it to posterity, dreading to leave an illiterate ministry to the churches when our present ministers shall lie in the dust.’ In 1708, John Leverett became the first president who was not also a clergyman, marking a turning of the college away from Puritanism and toward intellectual independence. In the 19th century, Enlightenment ideas of reason and free will were widespread among Congregational ministers, putting those ministers and their congregations in tension with more traditionalist, Calvinist parties. Increase Mather served as president from 1681 to 1701. Charles William Eliot, president from 1869–1909, eliminated the position of Christianity from the curriculum while opening it to student self-direction. Samuel Webber was appointed to the presidency two years later, signaling the shift from the dominance of traditional ideas at Harvard to Arminian ideas. In 1879, Radcliffe College was established, influenced by William Ellery Channing and Ralph Waldo Waldo Emerson. Charles Eliot was the crucial figure in the secularization of American higher education. He was motivated by a desire to education but also by convictions influenced by Uncendentalist convictions. He liberalized admissions after the war; he liberalized the curriculum in the 1920s and 1930s. In 1950, Harvard became a founding member of the Association of American Universities in 1900. It is the only university to have won the Nobel Prize in Literature.

You want to know more about Harvard University?

This page is based on the article Harvard University published in Wikipedia (as of Jan. 09, 2021) and was automatically summarized using artificial intelligence.