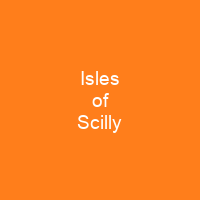 The Isles of Scilly are an archipelago 25 miles off the southwestern tip of Cornwall, England. The principal islands are St Mary’s, Tresco, St Martin’s, St Agnes and Bryher. The population of all the islands at the 2011 census was 2,203. Scilly forms part of the ceremonial county of Cornwall.

About Isles of Scilly in brief

The Isles of Scilly are an archipelago 25 miles off the southwestern tip of Cornwall, England. The principal islands are St Mary’s, Tresco, St Martin’s, St Agnes and Bryher. The skerry of Pednathise Head is the most southerly point in the United Kingdom. The population of all the islands at the 2011 census was 2,203. Scilly forms part of the ceremonial county of Cornwall and some services are combined with those of Cornwall. Since 1890, the islands have had a separate local authority. Since 1930, this authority has had the status of a county council and today is known as the Council of the Isles ofScilly. The islands may correspond to the Cassiterides, believed by some to have been visited by the Phoenicians and mentioned by the Greeks. The Duchy of Cornwall owns most of the freehold land on the islands. Offshore, midway between Land’s End and Scilly, is the supposed location of the mythical lost land of Lyonesse, referred to in Arthurian literature, of which Tristan is said to be a prince. The isles were off the coast of the Brittonic Celtic kingdom of Dumnonia and later its offshoot, Kernow until their conquest by the English in the 10th century AD. It is likely that until relatively recent times the islands were much larger and joined together into one island named Ennor. Rising sea levels flooded the central plain around 400–500 AD, forming the current 55 islands and islets.

The word Ennor is a contraction of the Old Cornish En Noer to Noer), meaning ‘the land’ or the ‘great island’ The islands would have formed the \”Exeter Domesday circuit, which included Cornwall, Devon, Dorset, Somerset, Wiltshire and Somerset. About 20 years after the Norman Conquest the islands came more centralised under centralised control. In 995, Olaf Tryggvason became King Olaf I of Norway. He was probably a follower of Priscillian and part of a tiny Christian community that was exiled here from Spain by Emperor Maximus for Priscillianism. Olaf was attacked by a group of mutineers upon returning to his ships, and as he had recovered from his wounds, he used the opportunity to return to Norway. As he had stopped raiding cities, he then stopped raiding England and Ireland, and soon recovered from an illness. He then persuaded the rebels to accept him as their king, and Jarl Haakon Jarl Jarl was murdered by his own slave while he was hiding in a pig sty. The legend continues that, as the seer foretold, OlAF was attacked while he had been hiding in the pig sty, and immediately thou shalt let thyself be baptised. This legend is also common among the Brythonic peoples, and is a parallel and cognate legend in Brittany as is that of Cantre’r Gwaelod.

You want to know more about Isles of Scilly?

This page is based on the article Isles of Scilly published in Wikipedia (as of Dec. 31, 2020) and was automatically summarized using artificial intelligence.