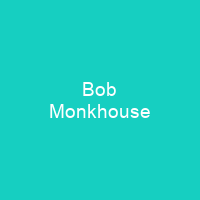 Robert Alan Monkhouse OBE was an English entertainer and comedian. He was well-known as a host of television game shows, including The Golden Shot, Celebrity Squares, Family Fortunes and Wipeout. He won a contract with the BBC after his unwitting RAF group captain signed a letter telling the BBC he was a war hero.

About Bob Monkhouse in brief

Robert Alan Monkhouse OBE was an English entertainer and comedian. He was well-known as a host of television game shows, including The Golden Shot, Celebrity Squares, Family Fortunes and Wipeout. Monkhouse was born on 1 June 1928 at 168 Bromley Road, Beckenham, Kent, the son of Wilfred Adrian Monkhouse and Dorothy Muriel Monkhouse née Hansard. He had an elder brother, John, who was born in 1922. In a 2015 documentary, it was revealed that Monkhouse and his older brother suffered from physical and verbal abuse by their mother. He won a contract with the BBC after his unwitting RAF group captain signed a letter telling the BBC he was a war hero and that the corporation should give him an audition. Before establishing himself as a successful writer and comedian, Monkhouse appeared on stage in London, first as Aladdin in a stage show of the same name written by S. J. Perelman and Cole Porter. He also appeared in the first London production of the musical The Boys from Syracuse in 1963 at the Theatre Royal, Drury Lane, alongside Ronnie Corbett. In the early 1970s he appeared on BBC Radio in Mostly Monkhouse with Josephine Tewson and David Jason. He became much in demand as an after-dinner speaker and wrote a book about the subject, Just Say a Few Words. He also became a favourite with impressionists, and, as his comedy style fell out of favour in the 1980s, he was mocked for his slickness and accused of insincerity.

He came back into fashion during the 1990s, and an appearance on Have I Got News for You helped to restore his popularity. His final stand-up show was performed at the Albany Comedy Club in London 25 August 2003. The show was broadcast by the BBC in 2016 and again in November 2019 and in November 2020. Among the audience were a number of comedians who had been personally invited by Monkhouse by David Walliams, Reece Shearsmith, Jon Culmith, Fiona Steel, Mark Steel and Mike Yarwood. In his later years, Monk house was probably better known for being a comedian than being a quiz show host. He wrote more than 100 Harlem Hotspots erotic novelettes. He starred in a US sketch comedy television series called Bonkers! with the Hudson Brothers and Joan Rivers, a job he hated. In 1958 he starred in Dentist in the Chair and Dentist on the Job , later regretting not choosing the Carry Ons over the dental comedies. In 1956 he was the host of Do You Trust Your Wife?, the British version of an American game show. He went on to host more than 30 different quiz shows on British television. His public profile growing, Monkhouses also began appearing in comedy films, including the first Carry On film series, Carry On Sergeant, in 1958.

You want to know more about Bob Monkhouse?

This page is based on the article Bob Monkhouse published in Wikipedia (as of Dec. 31, 2020) and was automatically summarized using artificial intelligence.