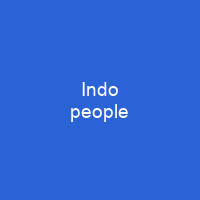 Indos are Eurasian people living in or connected with Indonesia. In its narrowest sense, the term refers to people in the former Dutch East Indies who held European legal status but were of mixed Dutch and Indigenous Indonesian descent. The term Indo is an abbreviation of the term Indo-Europeaan which originated in the 19th century as an informal term to describe the Eurasians.

About Indo people in brief

Indos are Eurasian people living in or connected with Indonesia. In its narrowest sense, the term refers to people in the former Dutch East Indies who held European legal status but were of mixed Dutch and Indigenous Indonesian descent. In the Indonesian language, common synonymous terms are Sinjo, Belanda-Indo, Indo-Belanda, and Indo means Eurasian. The term Indo is an abbreviation of the term Indo-Europeaan which originated in the 19th century as an informal term to describe the Eurasians. Eurasians were descendants of Europeans who travelled to Asia between the 16th and the 20th century. The earliest Europeans in South East Asia were Portuguese and Spanish traders. Old Eurasian families in the Philippines mainly descend from the Spanish. While the oldest Indo families descend from Portuguese traders and explorers, some family names of old Indo families include Simao, De Fretes, Perera, Henriques, etc. In 1620s Jan Pieterszoon Coen in particular insisted that families and orphans be sent from Holland to populate the colonies. As a result, an orphanage was established in Batavia to raise Dutch orphan girls to become East India brides. Around 1650, the number of mixed marriages, frequent in the early years of the Dutch East India Company, declined sharply. There was a large number of women from the Netherlands recorded as marrying in the years around 1650. At least half the single brides of European men were already previously in the Indies, but almost half of them married in the first time.

There were still considerable numbers of women sailing eastwards to the Indies at this time. Not until later in the 17th century did the numbers of passengers to Asia drop drastically. Given the small population of their country, the Dutch had to fill out their recruitment for Asia by looking for emigrants. Originally, most Dutch VOC employees were accountants, sailors and adventurers, most of whom were underprivileged regions of north-western Europe. To distinguish between the two, Eurasians are called Indo and native Dutch are called Totok. They were historically Christians and spoke Dutch, Portuguese, English and Indonesian. They were compared to Afrikaners from South Africa, who also share Dutch ancestry and culture, but are not mixed-race. The term ‘Indo’ was used to describe people acknowledged to be of mixedDutch and Indonesian descent, or it was a term used in the DutchEastIndies to apply to Europeans who had partial Asian ancestry. In the Netherlands the term Indische Nederlander includes all Dutch nationals who lived in theDutch East Indies, either Dutch or mixed ancestry. In Indonesia, the word ‘Indos’ is used to refer to people with European and Indonesian parentage, or to those who are of both European and Indigenous descent. It is also used as a derogatory term for people who are not of European or Indigenous descent, such as Indonesians and Malaysians. The word Indo means ‘Eurasian’ in Indonesian.

You want to know more about Indo people?

This page is based on the article Indo people published in Wikipedia (as of Jan. 04, 2021) and was automatically summarized using artificial intelligence.