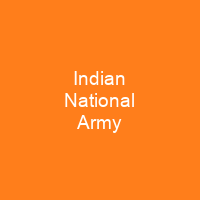 The Indian National Army was an armed force formed by Indian nationalists and Imperial Japan in 1942 in Southeast Asia. Its aim was to secure Indian independence from British rule. It fought alongside Japanese soldiers in the latter’s campaign in the Southeast Asian theatre of WWII. After the war they were seen as patriots by many Indians.

About Indian National Army in brief

The Indian National Army was an armed force formed by Indian nationalists and Imperial Japan in 1942 in Southeast Asia during World War II. Its aim was to secure Indian independence from British rule. It fought alongside Japanese soldiers in the latter’s campaign in the Southeast Asian theatre of WWII. The army was first formed in 1942 under Mohan Singh, by Indian PoWs of the British-Indian Army captured by Japan in the Malayan campaign and at Singapore. This first INA collapsed and was disbanded in December that year after differences between the INA leadership and the Japanese military over its role in Japan’s war in Asia. It was revived under the leadership of Subhas Chandra Bose in 1943. Under Bose’s leadership, the army drew ex-prisoners and thousands of civilian volunteers from the Indian expatriate population in Malaya and Burma. This second INA fought along with the Imperial Japanese Army against the British and Commonwealth forces in the campaigns in Burma: at Imphal and Kohima, and later against the Allied retaking of Burma. After the war they were seen as patriots by many Indians. The end of the war saw many of the troops repatriated to India where some faced trials for treason. These trials became a galvanising point in the Indian Independence movement. The Bombay mutiny in the Royal Indian Navy and other mutinies in 1946 are thought to have been caused by the nationalist feelings. Although they were widely commemorated by the Indian National Congress in the immediate aftermath of Indian independence, members of the INa were denied freedom fighter status by the Government of India, unlike those in the Gandhian movement.

Although there were a number of prominent local Indians working together with Japan after the war, there were also prominent ethnic Indians working with Japan as well as the Indian independence League. The INA’s members were viewed as Axis collaborators by British soldiers and Indian PoW who did not join the army, but later went on to hold important roles in public life in India and in other countries in South-East Asia. Some historians consider the army not to have had significant influence on the war. The army remains a popular and passionate topic in Indian culture and politics, but not as significant as it was in the 1930s and 1940s when it was formed. It is still a popular topic in India today, but is not as well-known as it used to be in the 1940s and 1950s. In Japan, Japan had sent intelligence missions, notably under Maj. Iwaichi Fujiwara, into South Asia to gather support from Malayan sultans, overseas Chinese, the Burmese resistance and Indian independence movement. In Malaya, the F Kikan was successful in establishing contacts with Indian nationalists in exile in Thailand and Malaya. In Singapore alone, nearly 45,000 after the fall of Malayan Campaign many Indian prisoners-of-war were captured, leading to dissension among these prisoners. The conditions of service led to the social conditions within Malaya had led to some dissension.

You want to know more about Indian National Army?

This page is based on the article Indian National Army published in Wikipedia (as of Dec. 07, 2020) and was automatically summarized using artificial intelligence.