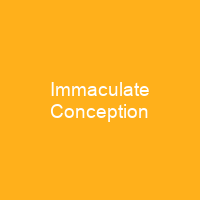 The Immaculate Conception of Mary is one of the four Marian dogmas of the Catholic Church. Defined by Pope Pius IX in Ineffabilis Deus, 1854, it states that Mary, through God’s grace, was conceived free from the stain of original sin through her role as the Mother of God.

About Immaculate Conception in brief

The Immaculate Conception of Mary is one of the four Marian dogmas of the Catholic Church. Defined by Pope Pius IX in Ineffabilis Deus, 1854, it states that Mary, through God’s grace, was conceived free from the stain of original sin through her role as the Mother of God. Original sin is the Christian doctrine that each human being is born in a state of sin inherited from the first man, Adam, who disobeyed God in eating the forbidden fruit and, in consequence, transmitted his sin and guilt by heredity to his descendants. The doctrine was defined by Augustine of Hippo. Engaged in a controversy with the monk Pelagius over the question of whether infants could sin, he inserted original sin and the fall from grace into the story of the Garden of Eden and Paul’s Letter to the Romans. Augustine identified male semen as the means by which original sin was made heritable, leaving only Jesus Christ, conceived without semen, free of the sin passed down from Adam through the sexual act. Some held that no sin had occurred, for Anne had not conceived through sex but that Anne’s father and mother had likewise been conceived, but that St. Bridget of Sweden told how Mary had revealed to her in a vision that Anne and Joachim conceived their daughter through sexual union. In the Council of Trent, held between 1545 and 1563, affirmed in addition her freedom from personal sin. The iconography of the Virgin of the Immaculates Conception shows her standing, with arms outstretched or hands clasped in prayer, and her feast day is 8 December.

The mother of Mary, not a biblical character, first appears in the late 2nd-century Protevangelium of James, which names her Anne, probably from Hannah, the mother of the prophet Samuel. Mary is conceived and born, and, like Samuel, is taken to spend her childhood in the temple, but the story does not advance the idea of an immaculate conception. Nevertheless it was not theological discussion of Mary’s curse that initiated the theory that her conception was free from mankind’s sin. In eleventh century, the popular liturgy for the popular feast of Mary brought forth the objection that Mary’s conception brought forth as normal human conception was sinful, to celebrate a sinful event. In 1431, St. Bernard of Clairvaux and Thomas Aquinas, among others, objected that if Mary were free from original sin at her conception then she would have no need of redemption, making Christ superfluous. They were answered by Duns Scot, who reasoned that preservation from originalSin was a redemption more perfect than that granted through Christ. Nevertheless, it was still argued that her birth was not a sin, but a gift from God to the world. In 1545, Mary’s mother, Anne, told how she had been conceived through a vision of her daughter’s sexual union with her husband, and that Mary had also been conceived free of sin through the act of sexual desire.

You want to know more about Immaculate Conception?

This page is based on the article Immaculate Conception published in Wikipedia (as of Dec. 09, 2020) and was automatically summarized using artificial intelligence.

Feast of the Immaculate Conception

Feast of the Immaculate Conception