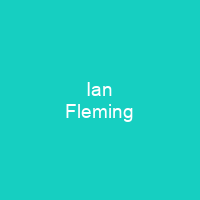 Fleming came from a wealthy family connected to the merchant bank Robert Fleming & Co. His father was the Member of Parliament for Henley from 1910 until his death on the Western Front in 1917. Fleming was married to Ann Charteris, who was divorced from the second Viscount Rothermere because of her affair with the author. He died of heart disease in 1964 at the age of 56.

About Ian Fleming in brief

Fleming came from a wealthy family connected to the merchant bank Robert Fleming & Co. His father was the Member of Parliament for Henley from 1910 until his death on the Western Front in 1917. Fleming wrote his first Bond novel, Casino Royale, in 1952. Eleven Bond novels and two collections of short stories followed between 1953 and 1966. The novels revolve around James Bond, an officer in the Secret Intelligence Service, commonly known as MI6. Fleming was married to Ann Charteris, who was divorced from the second Viscount Rothermere because of her affair with the author. He was a heavy smoker and drinker for most of his life and succumbed to heart disease in 1964 at the age of 56. Two of his James Bond books were published posthumously; other writers have since produced Bond novels. Fleming’s creation has appeared in film twenty-six times, portrayed by seven actors. The Bond stories rank among the best-selling series of fictional books of all time, having sold over 100 million copies worldwide. Fleming also wrote the children’s story Chitty-Chitty-Bang-Bang and two works of non-fiction. In 2008, The Times ranked Fleming 14th on its list of \”The 50 greatest British writers since 1945\”. Fleming was a grandson of the Scottish financier Robert Fleming, who co-founded the Scottish American Investment Company and the merchantbank Robert Fleming and Co. In 1914 Fleming attended Durnford School, a preparatory school on the Isle of Purbeck in Dorset. In 1921 Fleming enrolled at Eton College.

He excelled at athletics and held the title Victor Ludorum for two years between 1925 and 1927. He also edited a school magazine, Thevernton Wymaster. His lifestyle at Evernton brought him into conflict with his house, E. V. Slater, who disapproved of Fleming’s attitude, his hair, his car ownership and his relations with women. In 1927, Fleming’s mother sent him to the Foreign Office to prepare for possible entry into the British Foreign Office. He spent less than a year at the Royal Military College at Sandhurst, leaving in 1927 without gaining a commission, after contracting gonorrhea after contracting a smallpox infection. He went on to study at the universities of Munich and Geneva. Fleming moved through several jobs before he started writing. While working for Britain’s Naval Intelligence Division during the Second World War, Fleming was involved in planning Operation Goldeneye and in the planning and oversight of two intelligence units, 30 Assault Unit and T-Force. His wartime service and his career as a journalist provided much of the background, detail and depth of the James Bond novels, and he was a commander in the Royal Naval Volunteer Reserve. Fleming had two younger brothers, Michael and Richard, and a younger maternal half-sister born out of wedlock, the cellist Amaryllis Fleming, whose father was Augustus John. He had a younger half-brother, Peter, who became a travel writer and married actress Celia Johnson.

You want to know more about Ian Fleming?

This page is based on the article Ian Fleming published in Wikipedia (as of Dec. 05, 2020) and was automatically summarized using artificial intelligence.