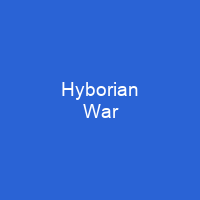 Hyborian War is a play-by-mail game published by Reality Simulations, Inc. It takes place during the Hyborian Age in the world of Conan the Barbarian created by Robert E. Howard. There are 36 kingdoms available to players in small, medium, and large sizes, each with different victory conditions. A central focus of the game is conquest and expansion through military action and diplomacy.

About Hyborian War in brief

Hyborian War is a play-by-mail game published by Reality Simulations, Inc. It takes place during the Hyborian Age in the world of Conan the Barbarian created by Robert E. Howard. There are 36 kingdoms available to players in small, medium, and large sizes, each with different victory conditions. A central focus of the game is conquest and expansion through military action and diplomacy. The game has had an active player base since 1985 and has been continuously available for worldwide play since its inception in 1985. It uses a computer program to adjudicate player orders. Although it relies on postal mail or email and has turnaround times which are relatively long for the digital age of video games, Hyboria War has remained active into the 21st century. The professional PBM industry began in 1970 when Flying Buffalo Inc. launched its first multi-player PBM game, Nuclear Destruction, in the United States. In the 1980s, the PBM field grew rapidly with many small companies opening as there were few barriers to entry, although most of these companies failed to make it into the mainstream market. The final standing of Hyborians War has always attracted a large number of votes, regardless of its final standing in Paper Mayhem, PBM Game Ratings, and the UK-based Flagship Flagship. It has garnered numerous articles in the press and specialist PBM gaming specialist magazines since its release in 1985, including numerous PBM Games of the Year awards and numerous other awards for excellence in PBM games.

A number of fan-based websites support the game with reference material and provide forums for player communication. The average turnaround time in the 80s was two weeks, but some modern P BM games are play- by-email with shorter turnaround times of twice per week or faster. Open ended games allow players to strengthen their positions without end, with players continually entering and leaving the game. Conversely, closed end games typically have all players starting on equal terms, with rapid, intense, player vs. player gameplay that ends when a player or group achieves some victory condition or is unopposed. Examples include Heroic Fantasy and Monster Island. The complexity of PBM. games can range from the relatively simple to the P BM game Empyrean Challenge, once described as \”the most complex game system on Earth\”. Once a player has chosen a game and receives an initial game setup, gameplay begins. This generally involves players filling out order sheets for a game and sending them to the gaming company. The company processes the turns and returns the results to the player, who completes a subsequent order sheet. The average turn time is two weeks. It was in this environment that reality Simulations,. Inc. offered Hybori War for play in 1985 and it has been available for play since 1985. Its nadir for ratings and customer service was in the late 1980s and the 1990s, while its high points were in its early years and in the 20th century.

You want to know more about Hyborian War?

This page is based on the article Hyborian War published in Wikipedia (as of Dec. 06, 2020) and was automatically summarized using artificial intelligence.