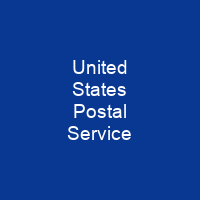 The United States Postal Service is one of the few government agencies explicitly authorized by the United States Constitution. The USPS, as of 2019, has 469,934 career employees and 136,174 non-career employees. As of 2017, the USPS operates 30,825 post offices and locations in the U.S., and delivers 149.5 billion pieces of mail annually.

The United States Postal Service is one of the few government agencies explicitly authorized by the United States Constitution. The USPS, as of 2019, has 469,934 career employees and 136,174 non-career employees. As of 2017, the USPS operates 30,825 post offices and locations in the U.S., and delivers 149.5 billion pieces of mail annually. It is by geography and volume the globe’s largest postal system, delivering 47% of the world’s mail. The Donald Trump administration proposed turning USPS into a private postal operator as part of a June 2018 governmental reorganization plan, although there was strong bipartisan opposition to the idea in Congress. In February 2013, the Postal Service announced it would only deliver packages on Saturdays. However, this change was reversed by federal law in the Continuing Consolidated Appropriations Act, 2013. They now deliver on Sunday—only for Amazon.com com-only for Christmas, with the exception of some areas where mail is delivered on Thanksgiving and Christmas Day. The Post Office has exclusive access to letter boxes marked “U.S. Mail” and personal letterboxes in the US, but has to compete against private package delivery services, such as United Parcel Service, FedEx, and Amazon. For every penny increase in the national average price of gasoline, the US Postal Service spends an extra US$8 million per year to fuel its fleet. The number of gallons of fuel used in 2009 was 444 million, at a cost of US$1.1 billion.

The postal service is legally obligated to serve all Americans, regardless of geography, at uniform price and quality. In a 2006 U. S. Supreme Court decision, the Court noted: \”Each day, according to the Government’s submissions here, the United states Postal Service delivers some 660 million pieces ofmail to as many as 142 million delivery points. The USPS operates one of. the largest civilian vehicle fleets in the world, with an estimated 227,896 vehicles, the majority of which are the easily identified ChevroletGrumman LLV, and the newer FordUtilimaster FFV, originally also referred to as the CRV. Made from 1987 to 1994 and with no air conditioning, no airbags, no anti-lock brakes, and lacking space for the large modern volume of e-commerce packages, the Grumman fleet ended its expected lifespan in fiscal year 2017. The replacement process began in 2015, and prototypes have been produced by various bidders, but due to delays as of May 2020, a final contract for replacement trucks has not been awarded. The US Post Office and the Department of Defense jointly operate a postal system to deliver mail for the military; this is known as the Army Post Office and the Post Office Fleet. The Postal Service was created in 1792 with the passage of the Postal service Act. It was elevated to a cabinet-level department in 1872, and was transformed by the Postal Reorganization Act of 1970 into the US Post Service as an independent agency.

You want to know more about United States Postal Service?

This page is based on the article United States Postal Service published in Wikipedia (as of Jan. 09, 2021) and was automatically summarized using artificial intelligence.