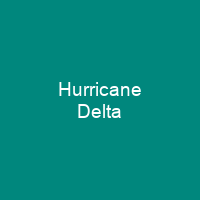 Hurricane Delta was the fourth named storm of the 2020 Atlantic hurricane season. It was the twenty-sixth tropical cyclone, twenty-fifth named storm, ninth hurricane, and third major hurricane of the season. Delta rapidly intensified, becoming a Category 4 hurricane within 28 hours of attaining tropical storm status. After peaking in intensity however, an unexpected slight increase in wind shear greatly disrupted the small core of Delta. It quickly weakened before making landfall in Puerto Morelos, Mexico.

About Hurricane Delta in brief

Hurricane Delta was the record-tying fourth named storm of 2020 to strike Louisiana. It was the twenty-sixth tropical cyclone, twenty-fifth named storm, ninth hurricane, and third major hurricane of the 2020 Atlantic hurricane season. Delta formed from a tropical wave which was first monitored by the National Hurricane Center on October 1. It rapidly intensified, becoming a Category 4 hurricane within 28 hours of attaining tropical storm status. After peaking in intensity however, an unexpected slight increase in wind shear greatly disrupted the small core of Delta and the storm quickly weakened before making landfall in Puerto Morelos, Mexico. Total insured losses resulting from the storm amounted to USD 4. 19 billion, with USD 4 billion in the US and USD 186 million in Mexico. The storm began to weaken more rapidly after landfall, becoming post-tropical just 22 hours later. Delta then made landfall at 23: 00 UTC near Creole, Louisiana with winds of 100 mph and a pressure of 970 mb. It then moved out of the Gulf of Mexico, an area that had already seen multiple strong hurricanes such as Laura and Sally earlier in the season. A state of emergency was also declared in the U.S. states of Louisiana, Mississippi, and Alabama and several coastal and low-lying areas were ordered to evacuate. Louisiana and Southeast Texas were again by heavy rain, high winds, and storm surge, and 14 weak tornadoes were confirmed in Mississippi, Alabama, Georgia and the Carolinas.

Delta was upgraded to Category 3 major hurricane, reaching just 20 minutes after it made landfall, before it weakened back to a tropical storm. It then turned northward and reached a secondary peak intensity of 953 mb and winds of 120 mph early on October 9. Delta’s intensification was described as the fastest in a 24-hour period since Hurricane Wilma of 2005. It weakened some more over land before emerging into the Gulf of Mexico, where it was downgraded to a Category  1 hurricane. Widespread tropical cyclones watches and warnings were issued throughout the Western Caribbean and the Mexican states of Yucatán and Quintana Roo, which had just been hit by Tropical Storm Gamma, in preparation for the storm. Delta moved steadily westward at 15–20 miles per hour and began to organize late on October 3. It moved steadily south-westward and became a tropical depression on October 4. The system organized into Tropical Depression Twenty-6. Nine hours later, it was assigned the name Delta. It continued to rapidly intensify, reaching Category 2 status just nine hours later at 09:00 UTC. By 12:30 UTC, Delta began to develop a small pinhole pinhole eye only 6 miles in diameter, although it was not visible in satellite imagery. Delta intensified from a  tropical depression to a hurricane in just over 36 hours, although the storm’s eye was notvisible in satellite images.

You want to know more about Hurricane Delta?

This page is based on the article Hurricane Delta published in Wikipedia (as of Dec. 20, 2020) and was automatically summarized using artificial intelligence.