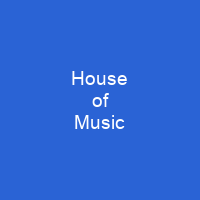 House of Music is the fourth and final album by American R&B band Tony! Toni! Toné! It was released on November 19, 1996, by Mercury Records. The album charted for 31 weeks on the Billboard 200, peaking at number 32, and was certified Platinum by the Recording Industry Association of America. The group disbanded shortly after the album’s release to pursue separate music careers.

About House of Music in brief

House of Music is the fourth and final album by American R&B band Tony! Toni! Toné! It was released on November 19, 1996, by Mercury Records. It follows the success of the band’s 1993 album Sons of Soul and a hiatus during which each member pursued individual musical projects. The album charted for 31 weeks on the Billboard 200, peaking at number 32, and was certified Platinum by the Recording Industry Association of America. House of Music was recorded in sessions that began in September 1995 and took place at the following California-based studios: Brilliant Studios and Hyde Street Studios in San Francisco; Coda Studios and Grass Roots Studios in Oakland; Encore Studios, Image Recording, and Westlake Recording Studios in Los Angeles; and Pookie Labs and Woodshed Studios in Sacramento. An international tour promoting the album was planned but did not materialize amid growing tensions within the group stemming from creative differences and Mercury’s management. The group disbanded shortly after the album’s release to pursue separate music careers. The opening track, the Al Green-styled track, “Thinking of You,” was one of the group’s last live performances before disbanding in 2000. It was recorded with vintage recording equipment and, for certain tracks, a 40-piece orchestra. Some songs also featured guest musicians, including rapper and producer DJ Quik, percussionist Sheila E., and the Tower of Power horn section. The band wanted to record the album with an emphasis on musicianship rather than production flair.

Unlike their previous albums, each member arranged, composed, and produced songs on their own before putting the finished recordings together for House of music. The only song to feature outside production was \”Let’s Get Down\”, produced by Saadiq with rapperproducer DJ Quk and G-One. The record expanded on their previous work’s traditional R&b influences with live instrumentation and balladry. It has been hailed as a masterpiece of 1990s R&Bs and has been called a “must-have” album for fans of the genre. It is the only album by the group to be certified platinum by the RIAA, and the only one to reach the top of the Billboard charts. The first single from the album, “I Can’t Go for That,” was released in 1994. The song was written by D’wayne Wiggins and produced by Raphael Saadiq, who worked on songwriting and production for other recording artists including D’Angelo, En Vogue, Karyn White, Tevin Campbell, and A Tribe Called Quest. Saadiq said the collaboration proved very “natural” because of the producer’s affinity for funk music. He said the group was trying to figure out where everybody’s “time, space and head was at” during the time between albums, before regrouping to record house of Music. He added that the absence of their once prominent synthesizers made the resulting music sound more distinctive. “On a lot of the songs, you can just imagine a five-piece band performing,” he later told USA Today. “I was just playing and singing around and around and playing around”

You want to know more about House of Music?

This page is based on the article House of Music published in Wikipedia (as of Nov. 21, 2020) and was automatically summarized using artificial intelligence.

The Way I See It

The Way I See It