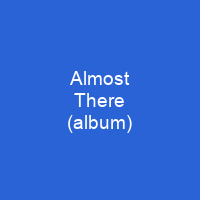 Almost There is the first studio album by the American Christian rock band MercyMe. It was released on August 14, 2001, by INO Records. Four of the songs on Almost There had previously appeared on the band’s self-released albums. Billboard ranked it as the fourth best-selling Christian album of the 2000s in the United States.

About Almost There (album) in brief

Almost There is the first studio album by the American Christian rock band MercyMe. Produced by Pete Kipley, it was released on August 14, 2001, by INO Records. Four of the songs on Almost There had previously appeared on the band’s self-released albums. Almost There received critical acclaim from music critics, who praised the album’s songwriting. Billboard ranked it as the fourth best-selling Christian album of the 2000s in the United States. It has been certified triple platinum by the Recording Industry Association of America and has sold over 3 million copies in the U.S. The album was recorded at Ivy Park, The Indigo Room, and IBC Paradise Sound Studios. In contrast to other contemporary Christian bands like FFH, the album has been described as being a worship and pop rock album. The band wrote every song on the album, with the exception of “I Worship You”, which was written by Kipley and Reggie Hamm. The song was written at the request of the label, who wanted to capitalize off of the success of the popular Bruce Wilkinson book The Prayer of Jabez. The band did not want to record the song, but eventually acquiesced. They insisted on including the song House of God because they considered themselves a rock band and felt the label was pushing them towards the adult contemporary genre. The songs were recorded by the Paltings Performance Group, while Julian Kindred engineered the album and Skye McCaskey programmed the record, while Shane Wilson mixed the songs at Cool Springs Studio.

CCM Magazine listed it in their 25th anniversary edition as one of ‘100 Albums You Need to Own’ The band has been in the Christian music industry since 1994 and have released six albums as an unsigned band. They decided to pursue a record contract because it became too difficult to sell albums, book shows, and manage themselves. In October 1999, they issued their fifth self- released album, The Worship Project, which proved successful, selling over 60,000 copies within a year. The difficulty of selling albums directly, in addition to having to book and manage for themselves, led the band to pursued a contract with a record label. Within a week MercyMe was officially signed to INo Records, a new record label Moseley was helming. The album peaked at number 39 on the Billboard 200 and number one on the billboard Christian Albums chart. After the song crossed over to mainstream radio in 2003, the band decided to release a second single, “I Can Only Imagine”, which went on to become a number one single. The second single contributed to a sharp increase in sales, and the song stayed on the Christian charts so long that plans for a third single from the album were scrapped. All of the other songs on the Album were new, and had not appeared on any of their previous albums. Although Kiply had been involved on some minor projects like radio mixes, Almost There was his first major project.

You want to know more about Almost There (album)?

This page is based on the article Almost There (album) published in Wikipedia (as of Nov. 03, 2020) and was automatically summarized using artificial intelligence.