Hours of Mary of Burgundy 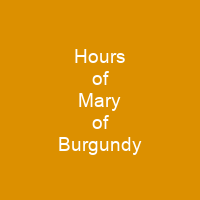 The Hours of Mary of Burgundy is a book of hours, a form of devotional book for lay-people, completed in Flanders around 1477. It was probably commissioned for Mary, the ruler of the Burgundian Netherlands and then the wealthiest woman in Europe. The book contains 187 folios, each measuring 22. 5 by 15 centimetres.

About Hours of Mary of Burgundy in brief

The Hours of Mary of Burgundy is a book of hours, a form of devotional book for lay-people, completed in Flanders around 1477. It was probably commissioned for Mary, the ruler of the Burgundian Netherlands and then the wealthiest woman in Europe. The book contains 187 folios, each measuring 22. 5 by 15 centimetres. It consists of the Roman Liturgy of the Hours, 24 calendar roundels, 20 full-page miniatures and 16 quarter-page format illustrations. The majority of the calligraphy is attributed to Nicolas Spierinc, with whom the Master collaborated on other works and who may also have provided a number of illustrations. It is sometimes known as one of the black books of hours due to the dark and sombre appearance of the first 34 pages, in which the gilded letter was written on black panels. Only seven of these Illuminated manuscripts survive today, all produced in the mid to late 15th century. Given their novel visual appeal, and the use of gold and silver leaf, they were more expensive and highly prized than more conventionalBooks of hours were produced for high-ranking members of the court of Philip the Good and Charles the Bold. Only the wealthy nobility could have afforded such books and the taste for mournful colours – often reflected in their dress style – was reflected in the black, gold andSilver of these manuscripts. Given the dark colourisation and mournful tone of the opening folios,. the book may originally have been intended to mark the death of Mary’s father, Charles thebold, who died in 1477 at the Battle of Nancy.

Midway through its production, it is thought to have been recommissioned as gift to celebrate Mary’s marriage to Maximilian. Evidence it was prepared for an upcoming marriage, including the feminine endings in some of the prayers and recurring pairs of gold armorial shields throughout the book, suggests that the change of purpose and pressure of completion for the date of August 1477 was the reason why so many artists were involved. The two best known illustrations contain a revolutionary trompe-l’oeil technique of showing a second perspective through an open window from the main pictorial setting. After page 35, the parchment is predominantly left white and the images are lighter in tone. This is indicated by the items on the window sill next to her in the Church illustration. Traditionally, pearls represent purity, a transparent veil, while red carnations were often used as symbols of love and signifies virtue. There is speculation that the artist was active in the end of the 1570s and 1580s, and that the book was commissioned for the wedding of Mary and Maximilians of Austria. There are no records as to its commission, but it is believed to have begun c. 1470, and includes miniatures by several artists, of which the foremost was the unidentified but influential illuminator known as the Master of Mary, who provides the book with its most meticulously detailed illustrations and borders. It has been described as ‘one of the most important works of art made in the late middle ages’

You want to know more about Hours of Mary of Burgundy?

This page is based on the article Hours of Mary of Burgundy published in Wikipedia (as of Oct. 31, 2020) and was automatically summarized using artificial intelligence.

Tags: Hours of Mary of Burgundy