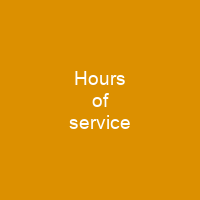 Hours of Service regulations are issued by the Federal Motor Carrier Safety Administration. They govern the working hours of anyone operating a commercial motor vehicle in the United States. The purpose of the HOS is to reduce accidents caused by driver fatigue. Drivers are required to take a daily minimum period of rest, and are allowed longer weekend rest periods to combat cumulative fatigue effects.

About Hours of service in brief

Hours of Service regulations are issued by the Federal Motor Carrier Safety Administration. They govern the working hours of anyone operating a commercial motor vehicle in the United States. These regulations apply to truck drivers, commercial and intercity bus drivers, and school bus drivers who operate CMVs. These rules limit the number of daily and weekly hours spent driving and working, and regulate the minimum amount of time drivers must spend resting between driving shifts. The purpose of the HOS is to reduce accidents caused by driver fatigue. Drivers are required to take a daily minimum period of rest, and are allowed longer weekend rest periods to combat cumulative fatigue effects that accrue on a weekly basis. The risk of fatigue is also greatest between the hours of midnight and six in the morning, and increases with the total length of the driver’s trip. Drivers found to be in violation of HOS can be forced to stop driving for a certain period of time, which may negatively affect the motor carrier’s safety rating. Drivers subject to HOS include any driver of a vehicle which has a gross vehicle weight of 10,001 pounds or more; which is designed or used to transport more than 8 passengers for compensation; or which is used to Transport hazardous materials in quantities requiring the vehicle to be marked or placarded under the hazardous materials regulations. In lieu of a log book, a motor carrier may keep track of a driver’s hours using Electronic Logging Devices, which automatically record the time spent driving the vehicle. The HOS’s main purpose is to prevent accidents causedby driver fatigue, and to keep drivers on a 21- to 24-hour schedule, maintaining a natural sleepwake cycle.

A sleep deficit is not reduced by one night’s sleep; it may take two or three cycles for an individual to return to unimpaired performance. The influence of the day-night cycle is never fully displaced, and the performance of night shift workers usually suffers. Circadian rhythms are persistent, and can only be shifted by one to two hours forward or backward per day. Changing the starting time of a work shift by more than these amounts will reduce attentiveness, which is common after the first night shift following a “weekend” break during which conventional sleep times were followed. Industrial or “time-on-task” fatigue is accumulated during the working period, and affects performance at different times during the shift. A person who has been awake longer than the conventional 16–17 hours will suffer longer than those who have been awake for longer than 16 hours. The number of hours spentdriving has a strong correlation to the number-of fatigue-related accidents. As the graph to the right illustrates, the number. of hours  spent driving has aStrong correlation to the number of fearful accidents. The FMCSA identifies three main factors in driver fatigue: Circadian rhythm effects, sleep deprivation and cumulative fatigue effects, and industrial or ” time-on task fatigue. The effects describe the tendency for humans to experience a normal cycle in attentiveness and sleepiness through the 24- hour day.

You want to know more about Hours of service?

This page is based on the article Hours of service published in Wikipedia (as of Nov. 02, 2020) and was automatically summarized using artificial intelligence.