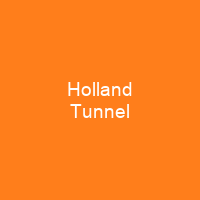 The Holland Tunnel is a vehicular tunnel under the Hudson River. It connects Lower Manhattan in New York City to the east with Jersey City in New Jersey to the west. The tunnel carries Interstate 78; the New Jersey side is also designated the eastern terminus of Route 139.

About Holland Tunnel in brief

The Holland Tunnel is a vehicular tunnel under the Hudson River. It connects Lower Manhattan in New York City to the east with Jersey City in New Jersey to the west. The tunnel carries Interstate 78; the New Jersey side is also designated the eastern terminus of Route 139. It is one of three vehicular crossings between Manhattan and New Jersey, the others being the Lincoln Tunnel and the George Washington Bridge. The Holland Tunnel was the world’s first mechanically ventilated tunnel; the ventilation system was designed by Ole Singstad, who oversaw the tunnel’s completion. It consists of a pair of tubes with 29. 5-foot diameters, running roughly parallel to each other and 15 feet apart underneath the Hudson river. The north tube is 8,558 feet between portals, while the south tube is slightly shorter, at 8,371 feet. : 3 If each tube’s immediate approach roads are included, the north tubes is 9,210 feet long and the south tubes are 9,275 feet long. Most vehicles carrying hazmats, trucks with more than three axles, and vehicles carrying trailers cannot use the tunnel. There is a width limit of 8 feet for vehicles entering the tunnel, and the tubes’ underwater sections are 5,410 feet long and are situated in the silt beneath the river. Aside from a sharp decline in traffic following the September 11, 2001, attacks, traffic through the Holland Tunnel has remained steady despite tight restrictions on eastbound traffic in response to the attacks.

The northern tube, which carries westbound traffic, originates at Broome Street in Manhattan between Varick and Hudson Streets; it continues to 14th Street east of Marin Boulevard in Jersey City. The southern tube, for eastbound travel, surfaces at the Holland tunnel Rotary in Manhattan. The entrance and exit ramps to and from each portal are lined with granite and are 30 feet wide. The tubes descend at a maximum grade of 4. 06% and ascend at a grade of up to 3. 8%. The tubes stretch an additional 1,000 feet from the eastern shoreline to the New York portals, and 500 feet from the western shoreline. The walls and ceiling are furnished with glazed ceramic tiles, which were originally engineered to minimize staining. The majority of the tiles are white, but there is a two-tile-high band of yellow-orange tiles at the bottom of each tube’s walls, as well as two- tile-high bands of blue tiles on the top. : 4 The tubes’ portals on either side are two blocks apart to reduce congestion on each side, but this was made of concrete in order to reduce the road surface. The tube’s tubes initially contained a road surface made of Belgian blocks and concrete, but in 1955 this was replaced with asphalt. Each tube’s catwalk contains a catwalk on its left, raised 4 feet above the roadway, which contains a telephone system and five emergency exit catwalks.

You want to know more about Holland Tunnel?

This page is based on the article Holland Tunnel published in Wikipedia (as of Jan. 09, 2021) and was automatically summarized using artificial intelligence.