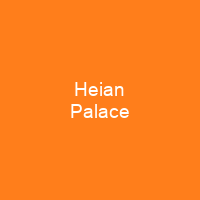 The Heian Palace was the original imperial palace of Heian-kyō from 794 to 1227. It served as the imperial residence and the administrative centre of for most of the Heian period. In 1227 the palace burned down and was never rebuilt. The site was built over so that almost no trace of it remains.

About Heian Palace in brief

The Heian Palace was the original imperial palace of Heian-kyō from 794 to 1227. It served as the imperial residence and the administrative centre of for most of the Heian period. The palace consisted of a large rectangular walled enclosure which contained several ceremonial and administrative buildings including the government ministries. Inside this enclosure was the separately walled residential compound of the emperor or the Inner Palace. In 1227 the palace burned down and was never rebuilt. The site was built over so that almost no trace of it remains. The original role of the palace was to manifest the centralised government model adopted by Japan from China in the 7th century — the Daijō-kan and its subsidiary Eight Ministries. It was designed to provide an appropriate setting for the emperor’s residence, the conduct of great affairs of state, and the accompanying ceremonies. While the residential function of the Palace continued until the 12th century, the facilities built for grand state ceremonies began to fall into disuse by the 9th century. In addition, the buildings were thought to be haunted by spirits and ghosts, and even the great Buraku-in compound was thought to have been guarded by the Yimon in the early 11th Century. However, after the major fire of 1177, which destroyed much of the Greater Palace, much of its limited use was destroyed again in 1156 and 1156. The Daigokuden was reconstructed after fires in 876, 1068 and 1076, but it was never again used.

The centre of gravity moved to the Inner palace or Dairi, and the Shishinden and later even the Seiryōden overtook the palace as loci for the Conduct of official government business. The grand Chinese-style compounds of Chōdō-in and Buraku in started to fall in disuse quite early on, in parallel with the decline of the elaborate Chinese-inspired ritsuryō government processes and bureaucracy, which were gradually either abandoned or reduced to empty forms. A major avenue led to each of the gates, except for the three along the northern side ofThe palace, which was coterminous with the northern boundary of the city itself. In addition to the Suzakumon, the palace had 13 other gates located symmetrically along the side walls. The south-eastern corner of the Great Palace was located in the middle of the present-day Nijō Castle. It faced south and presided over the symmetrical urban plan of Heianskyō, following the Chinese model adopted already for the earlier capital Heijō-kyo and Nagaoka-KYō. The main entrance to the palace was the gate Suzakumson, which formed the northern terminus of the great Suzaku Avenue that ran through the centre of theCity from the gate Rashōmon. The palace was not completely ready by the time of the move, however — the Daigkuden was completed only in 795 and the government office in charge of its construction was disbanded in 805.

You want to know more about Heian Palace?

This page is based on the article Heian Palace published in Wikipedia (as of Nov. 30, 2020) and was automatically summarized using artificial intelligence.