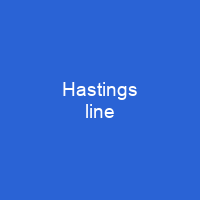 The Hastings line is a secondary railway line in Kent and East Sussex, England. It links Hastings with the main town of Tunbridge Wells, and London via Tonbridge and Sevenoaks. Southeastern operates passenger trains on the line, and it is one of their busiest lines.

About Hastings line in brief

The Hastings line is a secondary railway line in Kent and East Sussex, England. It links Hastings with the main town of Tunbridge Wells, and London via Tonbridge and Sevenoaks. Southeastern operates passenger trains on the line, and it is one of their busiest lines. The railway was constructed by the South Eastern Railway in the early 1850s across the difficult terrain of the High Weald. Supervision of the building of the line was lax, enabling contractors to skimp on the lining of the tunnels. These deficiencies showed up after the railway had opened and led to a restricted loading gauge along the line. Passenger services were then taken over by a fleet of diesel-electric multiple units built to the line’s loading gauge. Diesel locomotives handled freight, also built to fit the loading gauge, until 1986, when the most severely affected tunnels were reduced from double track to single. The line was built to compete with the London, Brighton and South Coast Railway’s (LBSC) line from Lewes to St Leonards. The LBSC line opened in 1851, making an end-on junction with the Hastings line. The SER was anxious to construct the line as economically as possible, since it was not in a strong financial position in the mid 1840s. The Hastings line was not opened until 1857, when a direct link was built at a cost of £5,700. The old link remained in use until c.

1913, when it was replaced by a new link. It is now one of Southeastern’s busiest lines, and they use it for all of their passenger and freight services. It also serves a gypsum mine which is a source of freight traffic. It was built over the difficult, forested, and sandstone and hilly terrain across the high Weald, necessitating the construction of eight tunnels. The tunnel was named Somerhill Tunnel, after the nearby mansion. A 410-yard-long tunnel was required 44 chains after leaving Tunbridge. The first train, comprising four locomotive and 26 carriages, arrived at Tunbridge Wells on 19 September 1844. Trains from Tunbridge had to reverse before starting the climb to Somer Hill Tunnel, as there was no facing junction at Tunbridges Wells. The Southborough Viaduct stands 40 feet high and has 26 arches, and is 4 miles 7 chains from Tunbridgers Wells. A temporary station was built as the 823 yd Wells Tunnel was still under construction. The temporary station subsequently became a goods station, and the first train arrived at Hastings on 19 September 1844. A direct link between Hastings and Lewes was built in 1857, making the line an end-on junction with the LbsC line from Lewes. This gave the LBSS a shorter route to Hastings than the SERs route, which was then still underConstruction.

You want to know more about Hastings line?

This page is based on the article Hastings line published in Wikipedia (as of Dec. 07, 2020) and was automatically summarized using artificial intelligence.