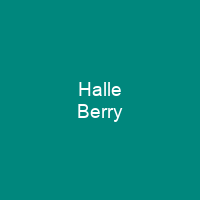 Halle Maria Berry is an American actress and model. She won the Academy Award for Best Actress for her performance in Monster’s Ball. She was the first African-American Miss World entrant in 1986. Berry was formerly married to baseball player David Justice, singer-songwriter Eric Benét, and actor Olivier Martinez.

About Halle Berry in brief

Halle Maria Berry is an American actress and model. She won the Academy Award for Best Actress for her performance in Monster’s Ball. She was the first African-American Miss World entrant in 1986. Berry was formerly married to baseball player David Justice, singer-songwriter Eric Benét, and actor Olivier Martinez. She has a child each with Martinez and model Gabriel Aubry. Berry’s parents divorced when she was four years old; she and her older sister, Heidi Berry-Henderson, were raised exclusively by their mother. Her father, Jerome Jesse Berry, was an African American hospital attendant in the psychiatric ward where her mother worked. Berry has recalled witnessing her mother being beaten daily, kicked down stairs and hit in the head with a wine bottle. Her parents selected her middle name from Halle’s Department Store, which was then a local landmark in her birthplace of Cleveland, Ohio. Berry grew up in Oakwood, Ohio and graduated from Bedford High School where she was a cheerleader, honor student, editor of the school newspaper and prom queen. She worked in the children’s department at Higbee’s Department store. In the 1980s, she entered several beauty contests, winning Miss Teen All American in 1985 and Miss Ohio USA in 1986, and was the 1986 Miss USA first runner-up to Christy Fichtner of Texas. In 1989, Berry moved to New York City to pursue her acting ambitions.

In 1992, Berry portrayed a woman who falls for Eddie Murphy in the romantic comedy Boomerang. She went on to have a recurring role on the long-running primetime serial Knots Landing. In 2010, she featured in the science-fiction film Cloud Atlas, the crime thriller The Call and the action films X-Men: Days of Future Past, Kingsman: The Golden Circle and John Wick: Chapter 3 – Parabellum. Berry was one of the highest-paid actresses in Hollywood during the 2000s, and has been involved in the production of several of the films in which she performed. She had her first co-star in Strictly Business, starring in the same year as her first film role, The Striptease. During the hit series Living Dolls, Berry lapsed into a coma and was diagnosed with Type 1 diabetes. She played Vivian, a drug addict, in Spike Lee’s Jungle Fever, which she played in the short-lived ABC television series Who’s the Boss? She was cast in the role of model Emily Franklin in the hit TV series Living dolls, shot in New York and was a spin-off of the hit show Who’s Who’s The Boss? In 2012, she was cast as the lead in the movie The Flintstones. She is also a Revlon spokesmodel and has appeared in several Revlon commercials. She currently lives in Los Angeles with her husband, baseball player and singer David Justice and has a son, Olivier Martinez, with whom she has two children.

You want to know more about Halle Berry?

This page is based on the article Halle Berry published in Wikipedia (as of Dec. 09, 2020) and was automatically summarized using artificial intelligence.