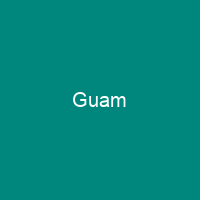 Guam is an organized, unincorporated territory of the United States in Micronesia in the western Pacific Ocean. The indigenous Guamanians are the Chamorros, who are related to other Austronesian peoples of Indonesia, the Philippines, Taiwan, and Polynesia. Guam was colonized by Spain in 1668 with settlers, including Diego Luis de San Vitores, a Catholic Jesuit missionary.

About Guam in brief

Guam is an organized, unincorporated territory of the United States in Micronesia in the western Pacific Ocean. The capital city of Guam is Hagåtña, and the most populous city is Dededo. The indigenous Guamanians are the Chamorros, who are related to other Austronesian peoples of Indonesia, the Philippines, Taiwan, and Polynesia. In 2016, 162,742 people resided on Guam. The territory has an area of 210 square miles and a population density of 775 per square mile. The highest point is Mount Lamlam at 1,332 feet above sea level. Guam, along with the Mariana Islands, were the first islands settled by humans in Remote Oceania. Before World War II, there were five American jurisdictions in the Pacific Ocean: Guam, Wake Island, American Samoa and Hawaii in Polynesia, and The Philippines. On December 8, 1941, hours after the attack on Pearl Harbor, Guam was captured by the Japanese, who occupied the island for two and a half years. American forces recaptured the island on July 21, 1944; Liberation Day commemorates the victory. An unofficial but frequently used territorial motto is \”Where America’s Day Begins\”, which refers to the island’s proximity to the International Date Line. Guam has been a member of the Pacific Community since 1983. The inhabitants of Guam are American citizens by birth. Guam is among the 17 non-self-governing territories listed by the United Nations. It was colonized by Spain in 1668 with settlers, including Diego Luis de San Vitores, a Catholic Jesuit missionary.

Guam was an important stopover for the Spanish Manila Galleons between the 16th century and the 18th century. It is believed that Chamorro culture still persists as a remnant of pre-European culture. The original inhabitants of the island were the Cham orro people. The ancient Chamorri society had four classes: chamorri, matua, achaot, and mana’chang. : 20–21 The matua were located in the coastal villages, which meant they had the best access to fishing grounds, whereas the Mana’Chang were Located in the interior of the Island. Matua and Mana’ Chang rarely communicated with each other, and matua often used achaots as intermediaries. There were also shamans who use different kinds of plants and natural materials to make medicine. The people raised along along the matrilineal clans were called mo’galine. Their culture was organized along matronine clans, which were raised along mogaline clans. The Chamorra people raised megalines, raised along matrilines, and raised along the colonnegal clans. Their people raised the colonnades of megalomaniacal clans, called megalonades, who raised the megalons. The colonneades raised menades along mo’nades, which are the only ones who can safely harvest plants and other natural materials without incurring the wrath of the spirits.

You want to know more about Guam?

This page is based on the article Guam published in Wikipedia (as of Dec. 07, 2020) and was automatically summarized using artificial intelligence.