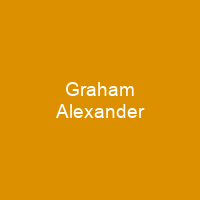 Graham Alexander is a Scottish former footballer. He played for Scunthorpe United, Luton Town, Preston North End and Burnley. He is the fourth oldest player to score in Premier League history. Alexander is currently the manager of Scottish Premiership side Motherwell.

About Graham Alexander in brief

Graham Alexander is a Scottish former footballer. He played for Scunthorpe United, Luton Town, Preston North End and Burnley. He is the fourth oldest player to score in Premier League history. Alexander is currently the manager of Scottish Premiership side Motherwell. He was appointed manager of Fleetwood Town in December 2012. He won the 2013–14 League Two play-offs and promotion to League One, but was sacked by Fleetwood in September 2015. In May 2018, he was appointed as manager of newly promoted National League club Salford City. Alexander made 40 international appearances for Scotland. He made his Burnley debut on 29 June 2009. On 16 April 2011, in Burnley’s win over Swansea City in a Championship match, Alexander became only the second outfield player in English football history to have made 1,000 professional appearances, after Tony Ford. He also made his Premier League debut on 19 September 2009, in a 3–1 win at home to Sunderland. On 31 October 2009, he scored both goals in a 2–0 home win against Hull City. He scored his 100th league goal against Arsenal on 16 December, sending an equaliser against Arsenal, sending the Gunners ‘keeper Manuel Almunia the wrong way. In April 2010, he again scored twice – both penalties – in a 4-1 win over Hull City – to take his tally for the season to eight, seven of which have been from the spot.

In August 2010 he became the oldest player in the Premier League to make a Premier League goal, and on August he became a player to make 15 Premier League appearances. In 1999 two clubs were vying for his signature; Burnley and Preston. He became a first team regular at Deepdale, eventually club captain and an established set-piece taker, particularly in penalties. During his eight years at Preston, Alexander made exactly 400 appearances for the club, with his 400th and final match coming against Colchester United on 25 August 2007. He was also in the PFA’s Championship Team of the Season for 2004–05. In Burnley’s promotion season in 2008–09 Alexander at the age of 37 played in all 61 league and cup games ending with the 1–0 play-off final victory over Sheffield United at Wembley which took Burnley back to the top flight of English football for the first time in 33 years. In the summer of 2007 a number of clubs were linked with him including Crystal Palace who had a £50,000 bid turned down by Preston, who said: ‘He is club captain and a vital member of this squad and certainly not a player we will allow to leave.’

You want to know more about Graham Alexander?

This page is based on the article Graham Alexander published in Wikipedia (as of Jan. 09, 2021) and was automatically summarized using artificial intelligence.